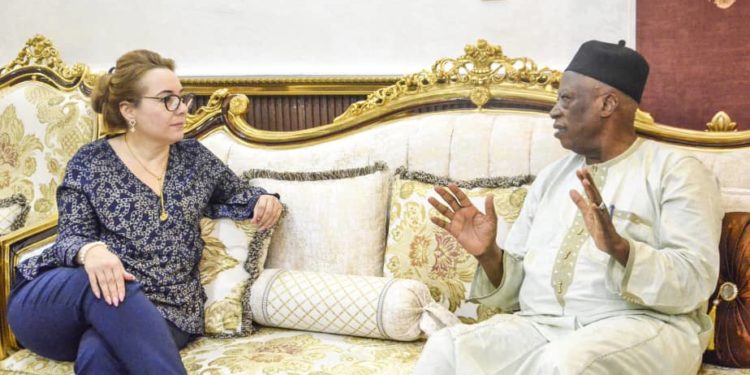 National chairman of the All Progressives Congress (APC), Senator Abdullahi Adamu, has boasted that the party would win the 2023 general elections in landslide in a free and fair contest.

Adamu, who spoke when he received Ambassador of Poland to Nigeria, Joanna Tarnawska, in his office at the APC national secretariat on Wednesday, noted that with the massive support the party enjoys from over 43 million Nigerians, there was no way it will lose the 2023 elections.

The Polish Ambassador, who was visiting the national chairman after the successful special national convention of the party, which produced a presidential flagbearer, had earlier congratulated Adamu on his election as APC national chairman.

She stated that her country was interested in political developments within Nigeria and will like to see a peaceful transition to another president after the tenure of President Buhari ends next year.

She also urged the APC to create opportunities for women and young persons to participate in the political terrain.

Ambassador Tarnawska noted that Poland looks forward to improved bilateral diplomatic relations between both countries but particularly in improved economic relations. She stated that Poland understood and sympathized with the challenges Nigeria was facing especially in the area of security, noting that her country had faced similar challenges in the past. She therefore hoped that the visit will be another layer of constructive relationship between Poland and Nigeria.

Adamu, while responding to the comments of Ambassador Tarnawska said that the party was conscious of the effects of developments in Nigeria on other African countries.

He noted that the party was therefore prepared to conduct itself at the next elections according to international best practices. He informed the Ambassador that because of the opportunities created by the APC, a woman gubernatorial candidate had emerged from the party in conservative northern Nigeria.

Responding, Adamu asked Poland and the international community to show more understanding about Nigeria’s challenges and electoral history. He said Nigeria was a developing democratic nation and lessons are being learnt in electoral processes, pledging that the APC will continue to do everything to advance democratic practice in Nigeria.