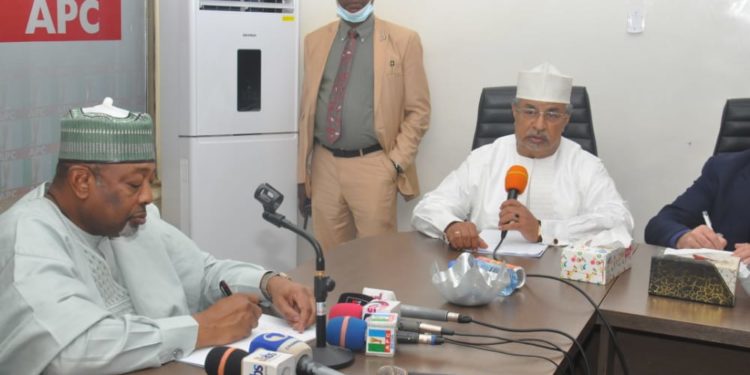 The United Nations has challenged the governing All Progressives Congress (APC) to make sure the 2023 general elections in Nigeria is peaceful, credible and accaptable.

The special representative of the secretary-general (SRSG) of the United Nations and head of the UN office for West and Sahel, Mahamat Saleh Annadif, made the demand when he visited the national leadership of the APC at the party’s national secretariat in Abuja on Monday.

The UN special representative told the party leaders the international body was banking on the APC for credible polls, adding that it is the hope of the that Nigeria stays in good health and be the locomotive for other regions beacuse if Nigeria sneezes, the entire African sub-region catches cold.

Annadif said, “We met this morning with officials of the Independent National Electoral Commission (INEC) and we plan to meet with all the key actors in Nigeria with a very simple message. We will like to see the coming elections going peacefully and accepted in all parts of Nigerians. With the APC in power, you have a very important role to play. We will like to emphasize that the UN is with you and supporting you.

“As I like to say, when Nigeria sneezes, the entire region catches cold. So we like and hope that Nigeria stays in good health and be the locomotive for other regions and this is why we will expect the APC to support peaceful elections. Thank you very much for welcoming our delegation and we hope to come back to celebrate the peaceful elections.”

Speaking on behalf of the national chairman, Abubakar Kyari said the recent governorship election in Ekiti State is a referendum and a vote of confidence in the APC and a pointer to the 2023 general elections.

He said while the APC is committed to the ideals of democratic governance and observance of rule of law in all its undertakings, it shall continue to apply them diligently in canvassing for votes ahead of the 2023 polls.

Kyari said, “We wish to inform the SRSG that the APC is poised to go into the general elections in the country with commitment to observing the rule of law and intend to participate peacefully. Bring the ruling Party and one with the largest number of registered members numbering 43 million people, the APC has every stake in the orderly and peaceful conduct of the elections across Nigeria.

“The APC considers the gubernatorial election that recently took place in Ekiti State as a referendum and a vote of confidence in the Party and a pointer to 2023 when the Party hopes to form the government in the center and also in most of the states across the six geopolitical zones of the country.

“The APC to assures the entire UN body through the SRSG that the APC is committed to the ideals of democratic governance and observance of rule of law in all its undertakings, and shall continue to apply them diligently while canvassing for votes and while it forms the next national government in 2023.

“APC is pleased to inform you of the progress made in Nigeria especially in the area of infrastructure development since the APC came into power in 2015. He should reaffirm the commitment of the Party to take Nigeria to higher levels of material and cultural development in the coming years particularly by the holistic implementation of the UN SDGs as well as the African Union Agenda 2063 and the AU Programme of Infrastructure Development (PIDA).

“The Party reiterates commitment of Nigeria to recharging of the Lake Chad as an urgent priority for the members of the Lake Chad Basin Commission (LCBC) which includes Cameroon, Chad, Niger and Nigeria. He should also reiterate Nigeria’s desire to reinforce the LCBC Multinational Joint Task Force (MNJTF) towards combatting terrorism and other forms of international crime across our common borders.

“The APC looks forward to further deepening of cooperation between the Office of the SRSG and the APC in all matters of governance towards advancement of ECOWAS, African Union and United Nations best practices.

“Finally, we wish the SRSG a successful visit to Nigeria and to urge him to feel at home because he is truly in his own country.”