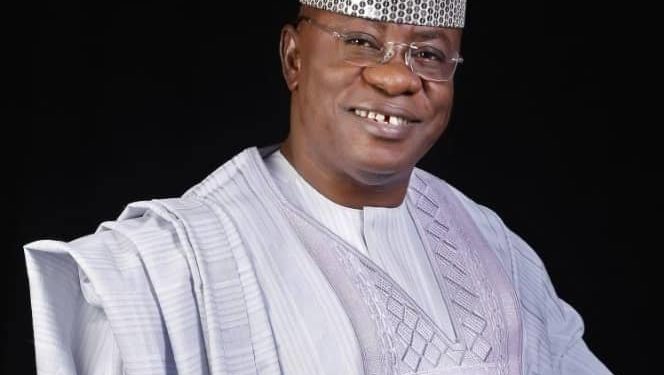 Its National Coordinator, Comrade, Godson Ikpontu made call in the statement made available to journalists in Abuja,on Friday.

According to him,” we beamed a searchlight on the antecedents of few good men from the Northeast where the office of the Vice President will be zonned. In the course of this reveiw we discovered the undaunted and impactful antecedents of Chief Ezekiel Irmiya Afunkoyo; a dogged, noble, humble and commited Member of the Party, who has also made several personal sacrifices to ensure the continuous growth and sustainability of the party.

The statement read:”With the current political and economic stake becoming higher and more precarious in Nigeria,, the need for Sen. Asiwaju Bola Ahmed Tinubu to pick Chief Ezekiel Afunkoyo as a running mate is intrinsic. This perception is premised on the outstanding capacity, voluminous achievements, political influence and vast security expertise of Ezekiel Afunkoyo, who is intellectually exposed and politically inclined with the needs of Nigerians.

“He is a highly trained Diplomat, a seasoned Public Servant with over 20years of experience, a Security Expert, an Investment consultant, an organizational Strategist, an Author, a goal oriented Administrator with several development skills and a Mentor with proven track records that transcends cultural diversity. As a security expert, he joined the Service of the National Intelligence Agency(NIA) in 1997, until his voluntary retirement in 2010. Before retirement he had attended the Agency’s Specialist Institute and also engaged other professional trainings within Nigeria and abroad.

“Ezekiel Afunkoyo is a Pioneer Member of the Economic and Financial Crimes Commision (EFCC). He had represented Nigeria at various international fora and in different capacity which includes the Oil and Gas Conference in Ravenna Italy, the International Conference for Security Experts held in Abu Dhabi, the Conference on Poverty Eradication in Africa held at Lebreville, Gabon and represented Nigeria at the ECOWAS Expert Draft Committee Meeting on Child Trafficking in Ghana.

“As a Member of the Joint Expert Training on Immigration Programme in Netherlands, Afunkoyo led the Team that evacuated Nigerian Refugees and Prisoners in Bangkok, Thailand. He had represented Nigeria at the Commonwealth Youth Forum in UK, after which he was appointed as Secretary (Security), Christian Pilgrimage to Israel from 2001 to 2002 and amongst other national and international representations.

“Chief Afunkoyo is currently the Board Chairman of Nnamdi Azikiwe University Teaching Hospital (NAUTH). As the Chairman of NAUTH, he has made several impressive achievements which includes the completion of the permanent site of NAUTH, which was abandoned for over 30years. Today the permanent site of NAUTH has been completed and the institutions now enjoys several advanced improvements with emphasis on quality trainings and service delivery.

“In a retrospect on his political job experiences, it is on record that Chief Afukonyo was the Chairmanship Candidate for National Republican Convention Party from 1994 to 1995. In 1995 untill 1996, he held the position of Director Research and Member Board of Trustees of the Democratic People’s Party(DPN). In 2011 he was appointed as GMB 2011 Campaign Coordinator for Taraba State and was later a Gubernatorial Aspirant of the then newly birthed Congress for Progressive Change(CPC) in Taraba State.

“After the dynamics that led to the emergence of All Progressive Congress-APC as the ruling party, Chief Afunkoyo maintained his interest in the growth and development of the party as he remained undauntedly committed in campaign crusades for President Muhammadu Buhari in the 2015 Presidential Election. In 2019, Chief Afukonyo made several efforts to ensure that the ruling All Progressive Congress-APC remained in power, especially at the presidential level.

“All of these put together justifies why the cap of the Vice President of Nigeria best fits Chief Ezekiel Irmiya Afunkoyo, as he remains committed to development and strategic supports to ensure the victory of APC and the candidacy of Sen. Asiwaju Bola Ahmed Tinubu as the next President of Nigeria.”

Sent from Yahoo Mail on Android