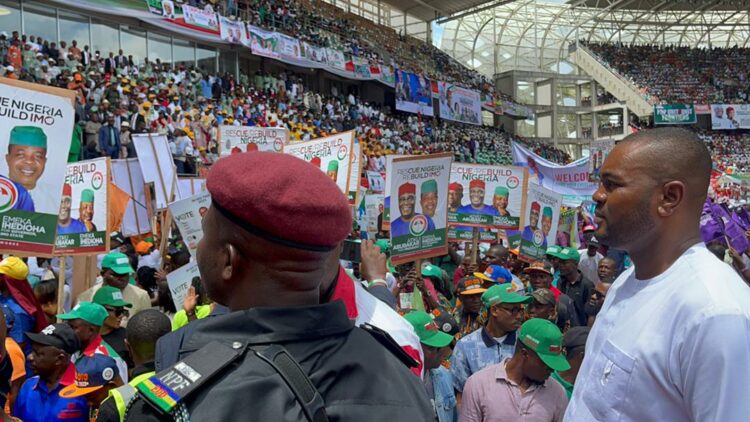 The Peoples Democratic Party (PDP), on Monday, flagged-off its presidential campaign in Uyo, the Akwa Ibom State capital, saying that the ruling All Progressives Congress (APC) has failed.

Atiku, who received the symbolic presidential flag from the PDP national chairman, Senator Iyorchia Ayu, noted the myriads of problems plaguing the country, saying that every sector of the system have collapsed with insecurity overwhelming Nigerians.

He recalled that PDP during his time as Vice President in 1999, made the country grew to become the largest economy in Africa, with security, job creation and other development indices on the high side, promising to rekindle such feats when voted to power in 2023.

“I swear, if you vote for PDP, insecurity will go away, jobs will be created for our youths, the tertiary education calendar will be stable,” Atiku said.

For his paet, his running mate and Governor of Delta State, Dr. Ifeanyi Okowa, expressed readiness of the PDP to reposition the country, stressing that “this campaign is a very serious business”, considering the need to urgently redeem the country from the current socio-economic challenges weighing her down in the last seven years.

“PDP is the only party ready and prepared to rescue Nigeria,” Okowa stated, adding that with the wealth of experience of Atiku in politics and business management, the country was on the verge of being revitalised if the PDP is enthroned at the centre in 2023.

Chairman of the PDP Presidential Campaign Council and the Akwa Ibom State governor, Udom Emmanuel, warned Nigerians against making the mistake of allowing the APC retain the centre in 2023, saying the PDP has launched a movement to restore and liberate Nigeria from her current fractured state.

He recalled that the country has become worst-off from 2015, when the APC took over with now collapsed economy, insecurity, lack of jobs and absence of quality infrastructure, assuring that the coming of the Atiku and Okowa pair, would reinvigorate the system.

“Indices of all vices are increasing now more than ever before,” he noted and charged the electorate to arm themselves with their Permanent Voter Cards (PVCs) with which to effect a change for the return of PDP in the 2023 elections.

Interim chairman of Nigerian Governors’ Forum (NGF), who doubles as the Director General of the Atiku Campaign Council, Governor Aminu Tambuwal; PDP national chairman, Iyorchia Ayu; Senate Minority Leader, Philip Aduda; his counterpart in the House of Representatives, Ndudi Elumelu; Governor Darius Ishaku of Taraba State, who spoke on behalf of the PDP Governors’ Forum and others, stressed the need for a united PDP to have a common front towards achieving victory in 2023.