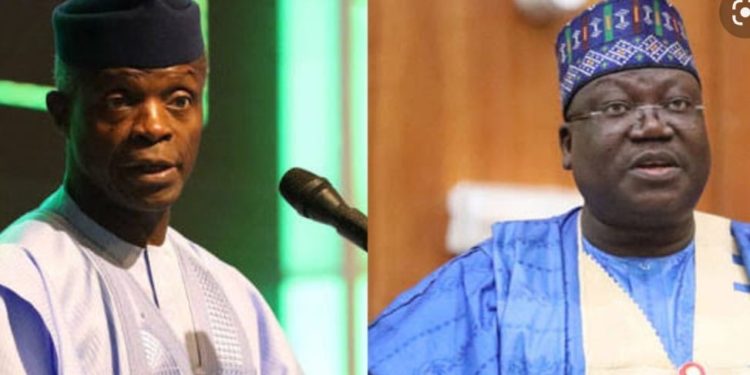 The immediate-past governor of Borno State and an ally of Asiwaju Bola Ahmed Tinubu, Kashim Shettima, has apologised to Vice President Yemi Osinbajo and Senate President Ahmad Lawan, for throwing jibes at the duo during a TV appearance few days ago.

Shettima is the incumbent Senator representing Borno Central in the National Assembly, while the trio of Osinbajo, Tinubu and Lawan are presidential aspirants on the platform of the All Progressives Congress (APC).

Shettima had appeared on Channels TV’s ‘Politics Today’ on Thursday night to make case for the presidential aspiration of Tinubu wherein he made reference to the two presidential aspirants: Osinbajo and Lawan, saying both were good men, who should be selling ice cream and trading in tomato respectively.

But denying denigrating both presidential aspirants on Sunday, Shettima via a post on his verified Facebook page said his Channels TV interview was taken out of context.

He wrote: “When I appeared on Channels TV last Thursday amidst the tension rippling through our political arena, it was to underline the promise Asiwaju Bola Ahmed Tinubu’s presidential bid held for those yet to establish the certainty of the hurdle ahead of the APC. I never set out to denigrate the personality of any aspirant, and definitely not that of my dear friends and allies. None of them is an opponent, so their aspiration isn’t a threat to us. They appear so in the sprint to become the party’s presidential flag-bearer in the 2023 elections, but they are our allies in the marathon.

“My assessments of the Vice President, Professor Yemi Osinbajo, and the President of the Senate, Senator Ahmad Lawan, were well-intentioned. I never set out to subject them to ridicule but, rather, to stir up interest in the contrasting virtues of the cast of aspirants putting up a fight against my preferred aspirant, one most favoured and advantaged to guarantee APC’s victory in the forthcoming presidential election.

“The interpretations of my remarks on Professor Osinbajo and Senator Lawan are, thus, being done literally and overblown. My words weren’t woven to portray them as unworthy aspirants, but merely to qualify them as non-threatening contenders. I, however, take full responsibility for my utterances and wish to appeal to our teeming supporters to neither take my words out of their metaphoric contexts nor interpret them as a measure and declaration of hostility towards my dear friends and allies.

“I hereby tender my unreserved apologies to the Vice President and the President of the Senate for the unintended pains my jibes might have caused them and their families and supporters.

“As we approach the finishing line of this tense political race, I’m not unaware of who the actual opponents are. A divided house, even if in the assumptions and imaginations of supporters with a distant grasp of our relationships with other aspirants, is the last impression we wish to create among Nigerians.

“I want this to be taken as an appeal to our supporters across all political camps to build bridges and mend fences as the actual journey is just about to begin. Victory, for the discerning, has always been the first lap of the race. Thank you for your understanding.”