2023: You Can’t Tell Us Who To Vote, Ebonyi Group Tells Umahi 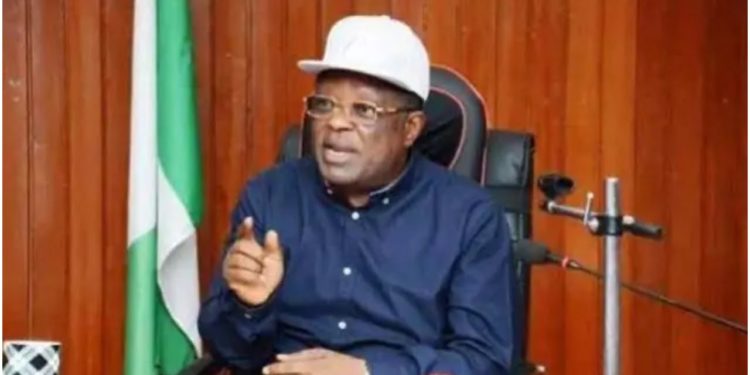 The Association of Ebonyi Indigenes Socio-Cultural in Diaspora (AEISCID), a socio-cultural organisation with interest in politics and governance of Ebonyi State, has described as “utmost disappointment, the disgusting and unfortunate diatribes of Ebonyi state Governor, Engr. David Umahi against the leadership of Ohaneze Ndigbo” after his loss at the All Progressives Congress (APC) presidential primary election.

Umahi had reportedly said Ebonyi people won’t vote for Peter Obi of Labour Party or any other presidential candidate in 2023 general elections except Bola Tinubu of the APC.

The Ebonyi governor got 38 votes from delegates of the state at the APC presidential primary election help last week.

But reacting to Umahi’s comment on which presidential candidate should Ebonyi people vote for in 2023, AEISCID through a statement released in Abuja Tuesday by its President worldwide, Ambassador Pascal Oluchchukwu, asked all the eligible voters in the state to ignore the governor and go ahead to vote their conscience in the 2023 elections.

Oluchukwu said: “Ebonyi people should therefore disregard his utter gibberish and be ready to elect candidates based on their pedigrees and credentials, competence and capacity across all levels in the 2023 general elections!

“AEISCID will always be there to make informed comments and opinions on who and which candidate will be capable to restore and redeem our lost image and rescue our beloved State from the clutches of Umahi’s tyranny.

“In the most bizarre manner, Umahi proclaimed that Ohaneze Ndigbo President, Prof. George Obiozor was no longer his President and that he wouldn’t have anything in common with the apex Igbo socio-cultural organisation.

“In another worrisome media statement credited to the Governor, Umahi had in a near public threat waggishly thundered that Ebonyians will only vote APC’s Presidential candidate, Bola Tinubu and all APC candidates in the 2023 elections. As in the days of the infamous Roman Emperors in the first Century who often centralized authority only in their own hands using the dual control strategy, Umahi’s dictatorship has so grown that he now assumes Ebonyi and by extension, Igbo nation to be an instrument under his imperial peerage.

“Even the PDP that provided him the tallest ladder to power and the men who were behind that have all been thrown under the bus by a rapaciously greedy and selfish Governor Umahi. In November 2020 when he defected to the APC thinking he would have coerced Ebonyians to sink the PDP boat in the State and follow him, Umahi boasted that his mission was to actualize the Igbo Presidency and he has severally mentioned it in the media that he would be in sever pains if the APC fails to give an Igbo man its Presidential ticket.

“How the Uburu butterfly began to assume himself a bird is unimaginable to this noble association. But now that he has tested his unpopularity and eaten from his own poisoned chalice of the betrayals that is Nigeria’s national politics, Umahi should be advised to lick his wounds in silence and not try to create a bad blood between Ebonyians and their loving Igbo brothers.

“He has in the first instance never been seen to genuinely or even pretentiously fight any Igbo cause needless to talk of assuming he would be rallied round as an Igbo Presidential material. Igbos know their own and those who love them. And it is certainly not those fighting against their collective interests and agenda who would sell them out to their enemies like an Umahi who even denies his true identity.

“The vociferous threat that Ebonyians will vote his APC and not any other candidate is one of the most undemocratic assertions that chiefly points at how much of a Lord Manor he assumes to have become in Ebonyi with his prebendal survivalist politics. Only a man who suffers serial inferiority complexities like Umahi would want to force his choice of Tinubu on Ebonyians and we dare that he would never succeed.”