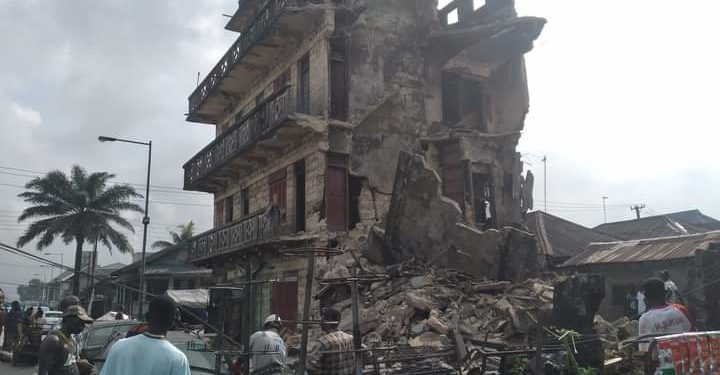 Scores of people in the early hours of Wednesday escaped death while goods worth millions of Naira were destroyed when part of a three-storey colonial era building collapsed in Port Harcourt, the Rivers State capital.

However, no life was lost in the incident, which occured at about 2:00am on Wednesday morning

LEADERSHIP observed that the building, located along Bender Street in the Old Port Harcourt Town, had been marked for demolition by the Rivers State Ministry of Urban Development and Physical Planning since November 30, 2018. 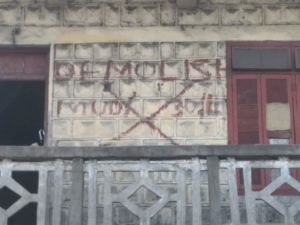 It was further observed that while the ground floor of the building serves as shops and stores for traders in the nearby Creek Road Market, the other three floors were occupied by destitutes
and homeless people.

Speaking with journalists, an eyewitness, who pleaded for anonymity, said the incident occured when an articulated vehicle that was passing through the street, mistakenly pushed down an electric pole, which in turn fell on a part of the building and brought it down

The eyewitness said: “I came out to ease myself at about 2:00am when I heard the sound of the engine of a lorry that just passed. Almost immediately, I noticed that the vehicle had hit a pole close to the building.

“Then, the pole fell on one side of the building and it started collapsing because it already had cracked walls. Fortunately, it was only one man that was sleeping under the staircase when the incident happened.

“I raised the alarm and other neighbours joined me to pull him out of the rubbles. There were only minor scratches on his body.”

The authorities of the Port Harcourt City local government council and the Rivers State Ministry of Urban Development and Physical Planning, were yet to react as at the time of filing this report.