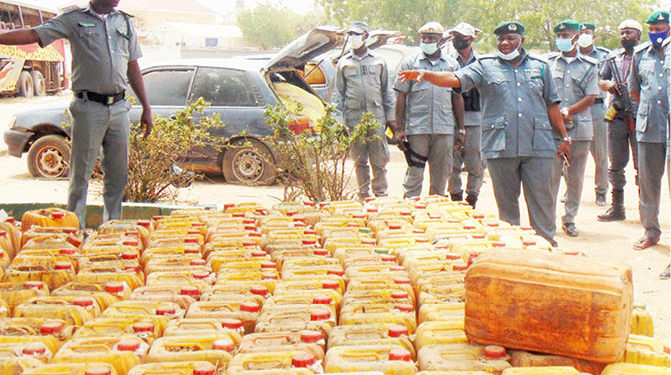 Despite the recurring issues of fuel scarcity facing Nigeria, the commodity is still being smuggled to neighbouring countries.A total 325,950 litres of Premium Motor Spirit (PMS), also known as, petrol was yesterday intercepted on the verge of being smuggled to Benin Republic from Nigeria.

Speaking at a press briefing, the Customs Area Controller, Seme border command, Compt. Mohammed Jibo, said 325, 950 litres worth about 10 tankers of 33000 with Duty Paid Value (DPV), of N65.6million were intercepted along the Badagry and Seme creeks.

According to him, all items seized such as 86 pieces of Apetamin syrup; 302 prices of dynewell syrup; 50 pieces of baba yellow syrup; three sachets of rofhymol, 32 bottles of cough syrup; 99 cartons of fearless energy drink and 139 cartons of soft drinks had a DPV of N1.48billion.

The command also seized 139 cartons of soft drinks,100 cartons of gabadol/tramadol, 120 milligrams, 2.8 kilograms and 306 parcels of cannabis sativa and 132 packets of tramadol capsules.
He, however, said that two suspected smugglers were arrested in connection to some of the interceptions, saying the seized petroleum product would be auction in line with standard operating procedure of perishable items.
“In the NCS’s quest to ensure the safety and well-being of Nigerians, most especially the fight against drug trafficking, today, the Command is handing over the items to both

National Agency for Food Drugs Administration and Control (NAFDAC) and National Drug Law Enforcement Agency (NDLEA). This is sequel to the approval granted by the Comptroller General of Customs, Col. Hammed Ibrahim Ali (rtd), and in line with the

Standard Operating Procedure (SOP) and equally in the spirit of inter-agency cooperation and synergy, the items are handed over to NDLEA and NAFDAC for further investigation.”

“At this juncture, may I appreciate the contributions of our stakeholders, the host communities, other security agencies and our media friends for their unflinching support towards the successes so far achieved. Professionalism, discipline, a very good

working relationship with our stakeholders, cordial relationship with the host communities and collaboration with other security agencies, were cardinal principles exhibited by the CAC while piloting the affairs of the Command, and the commitment and re-

dedicated of officers and men of the command in the fight against smuggling most especially that of the petroleum products all contributed to successes so far achieved,” he said.