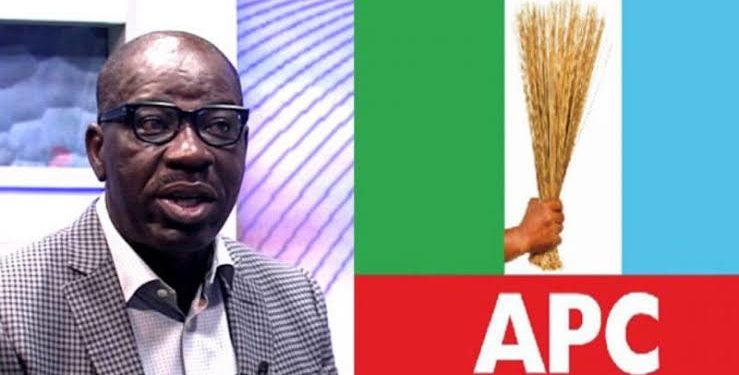 The Edo State government, on Monday, reacted to the allegation of land grabbing against it credited to the opposition All Progressives Congress (APC) in the State, saying the development gives credence to its position that the party thrives in lawlessness and disorder.

The APC had earlier in a widely circulated statement signed by the party’s Assistant State Publicity Secretary, Victor Osehobo, accused Governor Godwin Obaseki of perfecting a policy aimed at grabbing people’s land by demolishing their houses and seizing their plots and turn around to claim them as government lands.

But in a swift reaction, the state government in statement by the Special Adviser, Media Project to the State governor, Crusoe Osagie, noted that the APC should rather take the blame for disrupting land administration system in the state.

Crusoe said, “The tirade is not unexpected from the APC in the state, which thrives in lawlessness and disorder and sees nothing gainful in cleaning up a defective and unlawful system that empowered thugs and miscreants, who had hitherto intimidated and fleeced unsuspecting citizens in land and related transactions.

“The APC had been in bed with elements in communities particularly the now defunct Community Development Associations (CDAs) who trade in terror to intimidate, cow and dispossess people of their landed property, fermenting trouble that had scared investors from our state and discouraged many Edo sons and daughters especially in diaspora from investing in the state until recently.

“Given their peculiar mode of operation, these non-state actors were also known as ‘lions and tigers’ and were as vicious as they were deadly. They amassed a lot of money and influence from their activities, spreading terror and fear. It is these set of persons that the APC is making a case for in their infantile media release.

“Where was Edo APC when the state government increased the minimum wage in Edo State from N30,000 to N40,000 and harmonized the pay of pensioners in the state? Is the impact of this landmark initiative not felt by a lot more people in the state? Why didn’t they speak up at the time this feat was recorded?

“On the charge for the state government to deploy its assets to check banditry and herdsmen attacks, the Edo APC is obviously playing the Ostrich. In case they have forgotten, I would like to remind them that the Federal Government – which is controlled by their party, the APC – is constitutionally empowered to address issues of national security.”