by Patrick Ochoga
in Politics
0 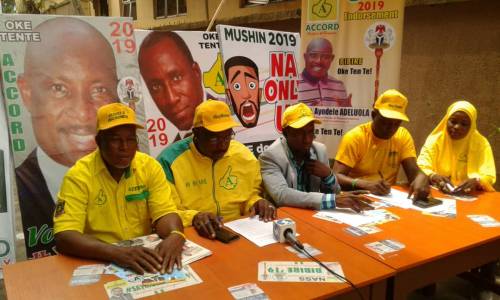 The leadership of Accord Party has cautioned aspirants to be wary of participating in any primary election without the presence of the Independent National Electoral Commission (INEC) as directed by the law.

National secretary of the party, Dr Samson Isibor, gave this warning in Benin City, Edo State while reacting to recent court judgment that affirmed Rev Isaac Adeniyi as the authentic national chairman of the party.

He said the new leadership would soon call a meeting of all the party state chapters to chart a way forward and organise to have properly constituted leadership and flag bearer ahead of the 2023 elections.

He said “The Executive Committee will have nothing to do with any Presidential primary which will not be observed by INEC, anyone who presented himself as Accord Presidential candidate is on his own”

On the verdict, Isibor said “We are grateful to God for giving us the victory, we are the executive that have been saddled with the responsibility of running the party since 2006 but this man that has been removed has been there acting as chairman for the past 20 years.

“He refused to leave we have been patient for justice to prevail and we thank God we have got the justice we prayed for so I appeal to all our members in all the states to be calm and that as soon as possible we shall call a meeting of all the state chapters including all those that have been there legally and illegally and rejuvenate the party.

“ Because as at now the party and the members are in low morale because there has not been any encouragement, they embezzled our money and ran the party aground but we want to bounce back and take our position in the comity of national parties, we don’t want to be a second hand party, we were formally in the forefront but because of the way those hijackers led by Hon Mohammed Nalado and his so called national exco, we were relegated but now the real exco has bounced back and we have instructed that no bank should deal with them again, INEC has been informed.

“I want to congratulate our national chairman Rev Isaac Adeniyi and myself who have been vilified but we are victorious and kudos to the judiciary because it shows that court remains the last hope of all the citizens of the country.”

7 Incredible Health Benefits Of Strawberries And Why You Should Eat More... Click Here For Details
Tags: Accord Party
SendShareTweetShare
Previous Post