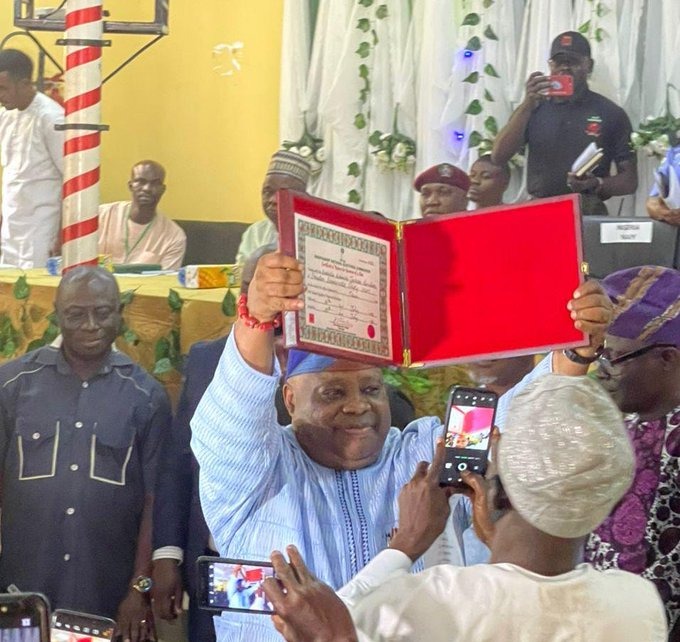 Barely 30 years after his elder brother, Senator Isiaka Adetunji Adeleke, held sway as the first executive governor of Osun State, Senator Ademola Adeleke last Saturday emerged as governor-elect of the state, establishing the family as one of the political dynasties in South West and indeed Nigeria.

LEADERSHIP reports that with the current victory of Senator Adeleke, this is the second time in 30 years that the Adeleke Family would be producing the governor of Osun State.

But the political journey of the family didn’t start with the brothers. The Ede-born political gladiator’s father, Senator A. Adeleke, emerged the Senator representing Oyo East at the National Assembly on the platform of the defunct Unity Party of Nigeria (UPN) in the 1979 election when Chief Bola Ige was the governor of old Oyo State.

So, it was not surprising that his scions would take after him, dominating the political space called Osun State that was later carved out of Oyo State.

By the turn of the Third Republic, an Adeleke was to emerge on the political scene again. Senator Isiaka Adeleke was elected governor of the then newly created Osun State in 1992. He was a member of Social Democratic Party (SDP), the dominant party in the state. That republic was, however, truncated.

His brother and now governor-elect, Senator Ademola Adeleke, was elected to replace him in the Red Chamber. Although he lost the 2018 governorship election narrowly, his second attempt at the top seat resulted in his creating political history in the state and reaffirming the family’s political legacy in the state.

It is also worthy of mention that only the Adeleke family of Edeland has emerged governor in Osun West Senatorial District.

The emergence of Ademola Adeleke as governor-elect is a fulfillment of the agitation for Osun State governorship seat by the Osun West Senatorial district whose people had cried over alleged denial of the seat.