by Innocent Odoh and Agency Report
in Cover Stories
0 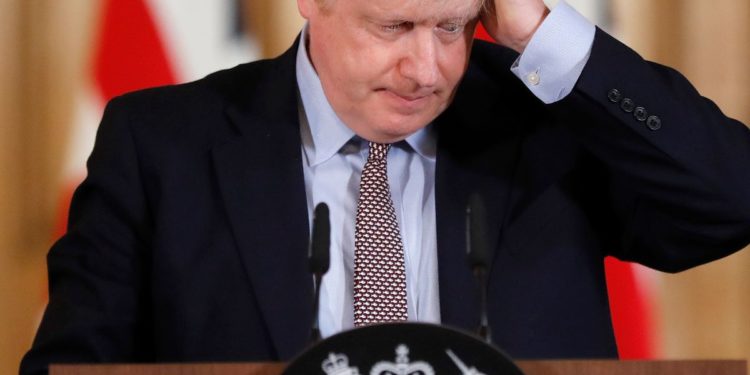 British Prime Minister Boris Johnson has resigned as the United Kingdom’s prime minister after he was deserted by seven cabinet ministers and many Conservative Party lawmakers who said he was no longer fit to govern.

The wave of resignations from the government and party exceeded 50 yesterday, as Northern Ireland Secretary Brandon Lewis became the first cabinet member of the day to quit, followed by seven other ministers.

Previously loyal supporters – including Priti Patel and Grant Shapps – urged him to step down on Wednesday.

Meanwhile, the attorney-general Suella Braverman has said she would stand in any leadership challenge, although she has not resigned.

In his resignation letter, Mr Lewis said, “I have given you, and those around you, the benefit of the doubt.

“I have gone out and defended this government both publicly and privately. We are, however, now past the point of no return.”

In his resignation speech at the door of Number 10 Downing Street, Boris Johnson thanked his voters: “Thank you for that incredible mandate, the biggest Conservative majority since 1987, the biggest share of the vote since 1979.”

“And the reason I have fought so hard in the last few days to continue to deliver that mandate in person was not just because I wanted to do so, but because I felt it was my job, my duty, my obligation to you to continue to do what we promised in 2019.”

But he has defied pressure to step down immediately, insisting he planned to stay on as prime minister while his party picks his successor.
Lacking ‘integrity’ and ‘competence’

The prime minister’s decision to quit marks the end of a roller-coaster political career in which he led Britain out of the European Union and took his Conservative Party to the largest election victory in three decades.

It also follows three years of scandals, including anger over parties held at Johnson’s Downing Street office during the coronavirus pandemic that broke lockdown rules and accusations of breaking international law over his threat to override parts of the treaty governing Britain’s exit from the European Union. In recent days, the 58-year-old had faced a huge internal revolt in his Conservative Party for appointing a politician accused of sexual assault.

“It has been a dramatic week – the craziest week I have ever experienced in all my time, and I am pleased we got here today,” Tobias Ellwood, Conservative member of parliament, told Al Jazeera.

“But we should have been here months ago and [we should have] recognised that Boris Johnson was not going to allow us to win the next general elections,” he said.
On Tuesday, Rishi Sunak and Sajid Javid, the chancellor and the health minister, respectively, quit their positions citing Johnson’s lack of “integrity” and “competence”.