by Chibuzo Ukaibe
in Cover Stories
0 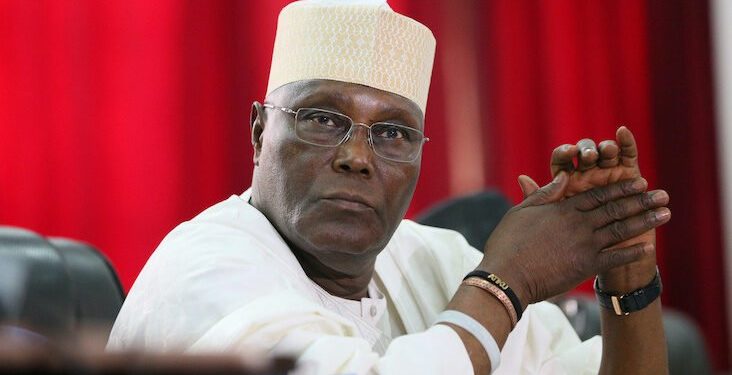 By his emergence, Atiku would be contesting for president for a total of six times and as PDP candidate for a total of three times in the 2007, 2019 and 2023 presidential polls.

There was Jubilation at the velodrome venue of the Moshood Abiola national stadium when he was declared winner.

Their exits, it was learnt, helped in swelling Atiku’s votes from the North, even though he still had to battle with former Senate President Abubakar Bukola Saraki and Bauchi State governor, Bala Mohammed.

Tambuwal declared absolute support for Atiku after withdrawing shortly before voting commenced, while Hayatudeen earlier yesterday announced that he was withdrawing from the race on grounds of what he called the obscenely monetised primaries.

Stepping down for Atiku, Tambuwal said, “Time has come for us to make sacrifices in the interest of our party and our nation. I have come to the conclusion that I have to step down.”

The exit of Hayatudeen, who hails from Borno State, from the race helped to give Atiku a fighting chance for Borno State.

One of Atiku’s returning officers at the polls, Senator Dino Melaye, had in appreciation of Tambuwal’s action, lifted him off the ground in jubilation.

Tambuwal and Hayatudeen had lost out in the northern consensus candidate arrangement to former Senate President Saraki and Bauchi State governor, Mohammed.

It was however learnt that Tambuwal agreed to step down for Atiku after he secured a deal with Atiku to emerge Senate president.

Although another aspirant, United States-based Dr Nwachukwu Anakwenze, withdrew for Wike, his vote was not enough to give the Rivers governor the PDP candidacy.

Indications that Atiku was in a clear lead emerged during the sorting of the votes, which started at 9pm and ended at 10:10am.

As the votes were being counted and Atiku’s name was reverberating across the Abuja national Stadium, his supporters jubilated, while Saraki’s female supporters who hitherto screamed whenever his name was mentioned started leaving the premises.

Interestingly, the majority of votes were shared among Atiku, Wike, Saraki, Mohammed, Udom and Anyim.

Terri oliver got one vote, Sam Ohuabunwa got one vote, Anyim got 14 votes, Udom got 38 votes, Mohammed got 20, Saraki got 70 votes and Wike got 237 votes to clinch the second position.

There were 12 voided votes, just as accredited delegates were 767.

Before voting commenced, all the aspirants were afforded five minutes to address delegates on why they should pick them.

Using his time judiciously, Wike promised to support any candidate that emerges.

He said, “Today, anybody who emerges I will support the person to the fullest. I am a committed party person. This is my party, I have not gone anywhere since 1999. If I emerge today, every state that has a problem will unite everybody to make sure we win 2023.

“The problem with Nigeria is leadership. Therefore, you must not make mistakes; you need courageous leaders that can stand APC. I am that person. I will win APC on behalf of Nigerians.”

On his part, Atiku promised to address the frustrations of party members after the recent party delegate ad hoc elections.

“I hope and pray that the way this convention has been organised it will be the same way the voting will be organized,” he noted.

He said the convention was historic because it would be the last before APC will no longer be in power, even as he appealed do the delegates to united in the interest of the party.

He continued: “No matter the provocation, sabotage and discrimination that may be meted to you, it will all be temporary.The important thing is to unite. I am distressed to have read that a number of our members feel excluded and frustrated and discriminated against in the recent delegates elections.

“I want to appeal to them that it is a matter of time. There is a saying that no condition is permanent.”

Earlier, the three top contenders for the PDP presidential ticket Atiku, Wike and Saraki had engaged in a show of popularity at the PDP special national convention.

The aspirants took turns to walk round the seating arena of the velodrome, waving to their supporters who cheered them on.

Wike kicked off the process to a warm applause by delegates, followed by Atiku who also got measureable applause and lastly Saraki. Governor Bala Mohammed had earlier made the same parade.

Former President Goodluck Jonathan was absent at the event in spite of the fact that he was listed among former presidents that would attend the event as contained in the programme of events.

Governor Samuel Ortom had led a delegation to invite Jonathan for the event days before the event.

However the former president is said to have joined the ruling party in his state and is widely speculated to contest the APC presidential ticket.

But former Vice Namadi Sambo was present at the event.

Speaking earlier, the PDP national chairman, Iyorchia Ayu, said the All Progressives Congress (APC) administration must not be allowed to win next year’s election.

Ayu who spoke at the PDP special convention to choose the party’s presidential candidate said, “So, the return of the PDP will be daybreak. Nigerians have broken up from the anesthesia of false promises. They have seen the limit of propaganda. And they want return to development which PDP represents.

“Our focus is on 2023, but we see retaking both Osun and Ekiti in the July elections as our low-hanging fruits.

“The electoral triumphs from there will sustain our momentum, boost the morale of party members and amplify our notice to the overwhelmed APC that PDP is coming.”

On his part, former Senate President David Mark decried the incessant borrowing by the APC administration, saying the ruling party has mortgaged the future of Nigerians.

Mark who is the chairman of the PDP National Convention of Organising Committee, in his opening address, urged Nigerians to massively vote for the PDP in next year’s general election.

He said, “Country men and women, history beckons on us today to rescue Nigeria. This Congress is the first step towards the process.

“Today, our students are at home for over three months on account of Academic Staff Union of Universities (ASUU) strike for failure of government to address issues affecting the education sector.

“Fellow country men and women are today in captivity with kidnappers and our government looking overwhelmed and unable to rescue them.

“Sadly, the APC government has mortgaged the future of Nigerians by ceaseless borrowings with nothing tangible to show. Nigeria is now the poverty capital of the world.

“The intractable insecurity situation, rising unemployment, poverty, ineptitude and corruption, and above all the poor management of our diversity have become the hallmark of the APC administration. These have made living in Nigeria worthless.

“Today’s convention is beyond the ordinary, it is a call to salvage Nigeria from the brinks. Nigeria has had chequered socioeconomic and political problems but never has it descended so low.

“The 2023 election is not a contest between the PDP and the other political parties. It will be a moment of historic decision of all Nigerians to right the wrongs of the misrule by the APC.

“For Nigerians, it is a battle for survival. But thank God they have found solace and faith in the PDP as the vehicle to redeem the situation and give them a chance to live again.

“No wonder, our logo the umbrella, is a veritable shade and shield for Nigerians and Nigeria as an entity.

“It is therefore a call to patriotic national service, for all of us; delegates to make the wise decision which will ultimately save Nigeria. All our presidential aspirants are of proven integrity.”

Meanwhile, some officials of the Economic and Financial Crimes Commission (EFCC) yesterday stormed the premises of the PDP national convention.

The anti-graft agency’s operatives, about 10 of them, who wore their EFCC vests, sauntered around the premises on arrival at the convention at 7:10pm.

Although it was not clear if they were invited or they merely came to lay siege, online reports were replete with claims that some of the aspirants had been doling out dollars to aspirants, ranging from $20,000 to $10,000.

But there was no indication that dollars were shared among delegates at the convention venue.

One of the aspirants and Investment Banker, Mohammed Hayatudeen, had earlier withdrawn from the race, lamenting the obscenely monetised primaries.