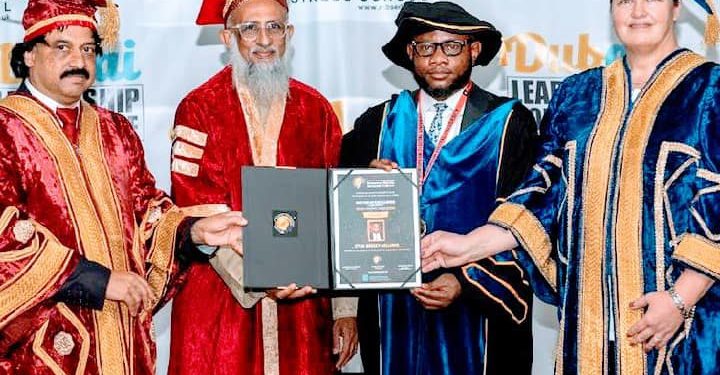 The chief executive officer AljazirahNigeria’s Etuk Bassey Williams alongside several other awardees received a prestigious honorary doctorate degree in the United Arab Emirates at an event that brought together several global citizens.

Williams, who received the award on July 28 alongside other dignitaries including the Central Bank Governor of Somalia, Abdirahman Abdullahi, expressed gratitude to the awarding institutions, Master Minds Business School, London, Arab Emirates University and European Digital University for considering him worthy of such an honour.

He said he was humbled to be recognised alongside eminent personalities across the world.

Williams assured to stand by the ideals which the institutions represent, stressing that he would remain a good ambassador.

He said: “There is no doubt that the institutions’ choices are on point and top class in their areas of core competencies.

‘‘It is with deep gratitude that I accept the award and fully pledge my unalloyed commitment and support to the great institutions of higher learning (Master Minds Business School, London, United Arab Emirate University and European Digital University) for this recognition.

“This award is highly revered by me and I promise to be a good ambassador of these great institutions. This would spur me towards enhancing human values.”

APC Will Need Inspired Supporters To Win Rivers In 2023 – Wali

2023: Group Canvasses Support For Al-Mustapha As Next President

2023: Group Canvasses Support For Al-Mustapha As Next President