by Sunday Isuwa and Kunle Olasanmi
in Cover Stories, News
0 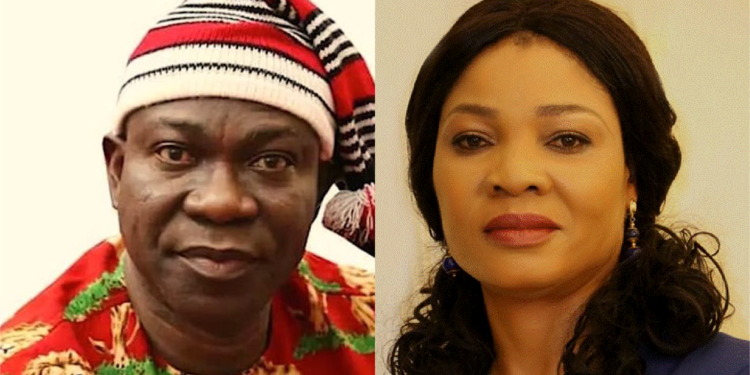 There are strong indications that former deputy senate president, Ike Ekweremadu, and his wife, Beatrice, may appear in court today instead of July 9, 2022 earlier scheduled for the matter.

A family source said this could be possible because the prosecution team and the court might have received the advice of the British attorney-general which was expected anytime before the July 9 date.

The family source also said Oba Nsugbe SAN, QC, might be the lead counsel in the case.

Nsugbe was called to the bar in 1985 (Gray’s Inn) and was appointed a Crown Court Reader in 1999 – the youngest practitioner ever appointed to the part-time judiciary.

He became a Barrister and Solicitor of the Supreme Court of Nigeria in 1986 and is also a Senior Advocate of Nigeria (SAN). Oba Nsugbe is currently the head of Chambers at Pump Court Chambers, London.

Ekweremadu and his wife were remanded in custody after they were denied bail by Uxbridge Magistrates’ Court in the United Kingdom.

The lawmaker and his wife are facing trial on charges bordering on human trafficking and organ harvesting.

At the last adjourned date, the lawmaker and his wife were expected to remain in custody until July 9 when the case was adjourned for hearing.

But a family source said the date might have been changed and therefore, the case is expected to come up today barring any last-minute changes.

The Metropolitan Police last week charged the couple with conspiring to arrange to bring the child to the UK to harvest his organ.

The suspects were reportedly arrested near the Heathrow Airport in London.

The Met Police said the child had been safeguarded.

The couple was also charged with conspiracy to arrange or facilitate travel of another person with a view to exploitation, namely organ harvesting.

But Ekweremadu, in his prepared statement, denied allegations of human trafficking for organ harvesting.

Ekweremadu’s position was contained in a British newspaper, dailymail.com.co.uk.

The paper which quoted Ekerenmadu’s lawyer, Gavin Irwin, reported: “He said at no stage has he arranged transport for anyone with intention to exploit them. His wife similarly denied the allegations in her prepared statement, the court heard.

Irwin, representing Ekweremadu, further said, “There is no question this is a serious allegation. Mr Ekweremadu is a member of the senate in Nigeria.

“He has previously held an even more senior role as deputy president of the senate. He is a member of the bar in Nigeria. He is a principal in a law firm that bears his name.

“Those issues taken together go way beyond him being a person of good character…rather that he has led a blameless life as a public servant.”

Mr Irwin added that the allegations were “nothing short of preposterous.”

Antonia Gray, for Mrs Ekweremadu, said “She has never been complicit or involved in any alleged illegal trafficking of any young person. She is a financial accountant with an unblemished record.”

Meanwhile, the senate president Ahmad Lawan has disclosed that a delegation from its Committee on Foreign Affairs will depart Nigeria for London on July 1, 2022, to pay a visit to Senator Ike Ekweremadu and his wife, who are both presently in detention over an allegation of organ harvesting.

Lawan made this known yesterday, while giving details into the outcome of a closed session held by the upper chamber before the start of plenary proceedings.

According to Lawan, the decision to wade into Ekweremadu’s arrest and detention was against the backdrop of a briefing received by the Nigerian High Commissioner to London.

He further disclosed that the Senate would engage the Ministry of Foreign Affairs and Nigerian High Commission in London on the recent arrest of Senator Ike Ekweremadu by the London Metropolitan Police in the United Kingdom.

He said, “I had a personal engagement with our Nigerian High Commissioner to Britain, Alhaji Isola Sarafa, who has done so well to establish contact with our colleague, who has been able to get his team to be in the court at Uxbridge where Ekweremadu was taken to.

“The High Commission has also been able to provide some consular services that include the engagement of some lawyers who will defend our colleague.

“We commend them for giving attention to the issue at stake. Equally, the Nigeria Foreign Affairs Minister has been engaged here, so that the Ministry of Foreign Affairs takes steps to provide diplomatic support for our colleague.

“Because this issue is already in court, we have limited opportunity to discuss beyond what we have done so far.

“But I want to assure the family of our colleague, Senator Ike Ekweremadu and Nigerians,that the Senate will continue to engage with our Ministry of Foreign Affairs as well as our High Commission in London.

“The High Commission has done so much but we still expect that it will continue to provide any other further consular services.

“We have also mandated our Committee on Foreign Affairs to engage with the British High Commission here in Nigeria, to find more details on this case, as far as the High Commission is involved.

“There will be a delegation to London to see Senator Ike Ekweremadu and his wife. A delegation from the Senate Committee on Foreign Affairs of the Senate will leave in the next two days to London for that purpose.

“I want to urge all federal government institutions that can do anything to ensure that Justice prevails in this case, that they do so.”