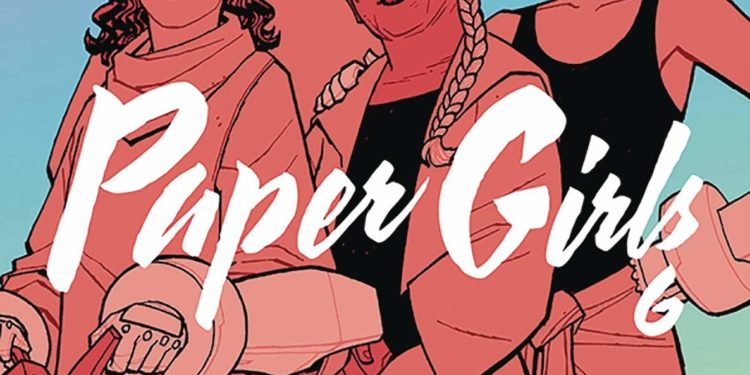 On the early morning of November 1, 1988, the four 12-year-olds while delivering papers at a Cleveland suburb, witness an interdimensional invasion of their city by aliens. The girls are gifted the power of awareness to time travel, and to comprehend how fleeting life is, and the disappointing banality of life.
Contrary to the usual modern-day young males coming of age stories sprinkled with sci-fi elements, Paper Girls feature young female protagonists in the 80s drawn from Knight’s childhood life.

“Growing up in the suburbs of Cleveland, there was one year when I was around 12, where all of the paper boys in our neighbourhood were suddenly replaced by paper girls,” recalls Vaughan. “I just thought it was so badass that these 12-year-old children were going out at 4am to deliver bad news to adults. It was just so interesting and captivating that they were newspaper delivery kids sort of a dying breed and yet they were the first of their kind. I thought, “this is such an interesting group of young women. They would make a great heart of a story.” So, it started with that inspiration and expanded from there.”

The comic story expanded to30 issues, and now a television adaptation of the comics is set for July 29, by Amazon Prime Video.
Playing the girls are Sofia Rosinsky as Mac Coyle, Camryn Jones as Tiffany Quilkin, Riley Lai Nelet as Erin Tieng, and Fina Strazza as K.J Brandman, as well as Ali Wong in the role of adult Erin.

Vaughan promises the live action series will prove a pleasant surprise for both the fans and first time contacts with the comics.

“I think sometimes people read a comic and are like, “oh! This is just storyboards, let’s just shoot this.” But comics are its own unique medium, and television can do things that we can’t,” said Vaughan.

“Like with needle drops-just the addition of music adds an incredible layer to this that we didn’t have access to. These young performers are some of the best younger actors

I’ve ever seen. This show really takes such advantage of the medium. If you’ve never heard of Paper Girls, if you’re not familiar with this comic, then the show is still 100 per cent accessible and I think you will love it. But if you’re a hardcore fan of the comic, it’s still going to be extremely surprising to you.”
With our blessing, they go to some places that we never could as a comic, and there are new characters, and new threats,” he concluded.