And The D-Day Of Intrigues Finally Went By

by Julius Ogar
in News
0 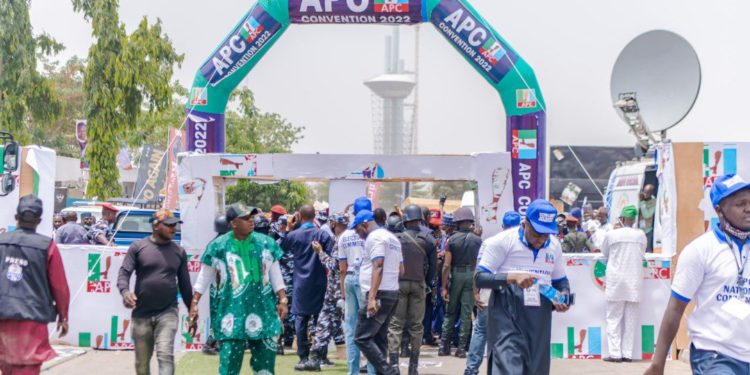 As far as political intrigues go, nothing is certain until it happens. And the players work very hard at it – double speak, treachery, collusions, betrayals, false leads, even felony and much more. Everything surrounding the recent convention of the ruling All Progressives Congress primaries was full of all these.

The conjectures, confusion, ignorant and informed commentaries in the run up to the main event were chiefly a product of the manoeuvres by the main actors.

The party, the President, the aspirants and state governors were at their scheming best. Crossing, sniggering and conspiring against themselves, the key players reenacted the imagery of ‘a basket of scorpions stinging themselves to death’, with due respect to late Chief Sunday Awoniyi.

But they have proved to be masters at political brinkmanship. All permutations of how card-tearing, cantankerous and possibly fighting aspirants were going to destroy the APC failed like a broken promise. The party, one more time, has fooled its doom casters and conducted what can pass fairly as open and competitive primaries.

It is very obvious that for a ruling party, the APC has been most unruly. Breaching rules of common-sense regarding elections spending, it pegged a sky-high N100 million fee for its presidential ticket – effectively neutralizing the “not too young to run provision from the outset. Discounting the value of the naira, theirs is the highest fare ever in the history of the country and among all the registered political parties.

Notwithstanding the astronomical amount and in spite of the unbridled inflation ravaging the economy, cabinet ministers and state governors  scrambled for the tickets as though they sold for the price of pop-corn.

As if that was not enough, it took the president barring his fangs and issuing an ultimatum, for cabinet members vying for political offices to resign their appointments from government. Among the aspirants were the ministers of State for Education, under whose auspices university teachers have waged an almost six-month old industrial action; and that of Labour and Employment who has been unable to broker an agreement with the striking teachers.

Talk of seeking power without proven capacity for exercising responsibility. They haven’t managed ministries well, but could obtain N100 million expression of interest forms to manage Nigeria for eight years after Buhari.

The caliber of aspirants who obtained the APC presidential ticket has reinforced the perception that internal corruption has festered beyond imaginable proportions under the Buhari administration. The menace he set out to eradicate and for which he had a standing reputation and won the confidence of Nigerians, has become a most frightening monster under his watch.

With the exception of Rochas Okorocha whose prayers for reprieve from the onslaught of law enforcement agents were finally answered during the party’s screening exercise, no aspirant under the APC has received queries from the Economic and Financial Crimes Commission as to the wherewithal they deployed to procure tickets, run expensive political campaigns as well as lubricate the even more expensive delegates.

The party’s national chairman, Senator Abdullahi Adamu, shocked even the President by unilaterally trying to impose a consensus presidential candidate to be endorsed at the party convention. His effort forced the hand of the President who had to deny that he had neither anointed, nor endorsed a preferred candidate.

You won’t blame Adamu. Himself a product of consensus, he probably couldn’t think of any better technique than a shortcut.

The party’s powerful caucus of northern state governors came to the rescue. How much of their resistance to Adamu’s manipulation was in national interest remains to be seen. But it didn’t only save their blushes, their demand for a southern presidential candidate reflects the general sentiment down South in Africa’s largest economy. It has given some hope of balancing the scales and giving a little chance for equity. The flip is that micro-zoning to the South-east would still have been fairer.

Had Adamu’s endorsement of Lawan sailed through (if it wasn’t a fluke), it would simply present a de ja vu of power transition from North to North – two northern presidential candidates in the two major political parties – who have the best chances of winning the general elections next year. There is no price for guessing that this could further stretch the tenuous fault lines of our national and regional polarities.

President Muhammadu Buhari himself came under much vitriol for trying to keep a mutual distance from taking an emphatic position on party affairs. Those who thought they heard him say he would choose a successor became flustered when the President did a volte farce and resumed his characteristic silence. This time more deafening in view of the clamour and poisonous fumes from the war chambers of the various contestants.

But the night of long knives is over and a candidate has emerged. The anti-party and counter-party wars are just about to start. It can no longer be said that the President or some other authority imposed on the party a choice against which there was no option. This small notch is a step that is right.

While we are at it, Nigeria’s distorted democracy continues to consolidate on intrigues, brinkmanship and self-seeking. But adds little, if anything of value towards liberating the country’s economic and other potentials. Awash with violent crimes and senseless killings, the country remains a victim of brutal rapists who seek power and shirk every responsibility that goes with it. It is politics for politics’ sake and a total absence or mere pretensions to governance.

If only someone could remind those who bought tickets to gun for the presidency and spare tickets to have a Plan B; and the delegates who earn in dollars with free travel, lodging and feeding – that while they trend, much poorer citizens have taken it upon themselves to raise N18 billion so that university students may return to their campuses.

For the umpteenth time, university teachers gifted the nation a striking gift on Valentine’s Day 2022, and have remained at home since then. The ones who ought to be concerned have their wards in well run foreign universities, never mind that they mount the podium to make correct noises about education.

It’s a season of intrigues. Who cares about university students? Do they even have voters’ cards?

It’s high time to play more incisive roles at the polling points or we shall always be victims of intrigue and remain locked out.

Turn Up The Dial Against Distracted Driving