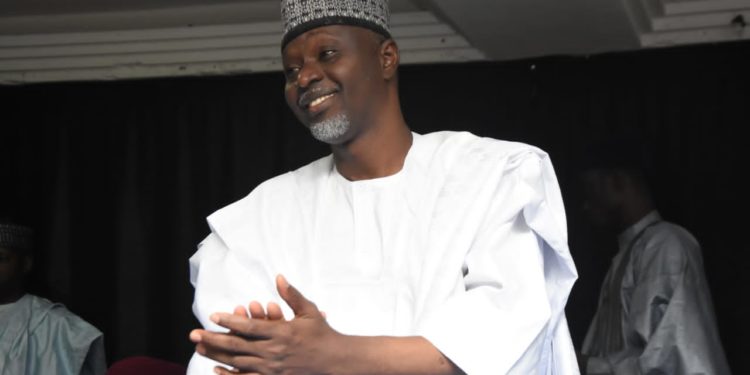 Hon. Abuzarri Suleiman Ribadu, has emerged House of Representatives candidate of the the All Progressive Congress (APC), for Amac/Bwari Federal Constituency in the Federal Capital Territory (FCT), Abuja.

Announcing the results, the returning officer for the election and Chairman election panel, Sunny Munidafe, said that Hon. Abuzanni Suleiman Ribadu won with 60 votes out of 110 votes to beat other five aspirants who contested alongside with him, and declared him winner of the election.

Though the process was characterized with violence as some hoodlums stormed the venue of the election and injured some delegates.

Address newsman’s, Luise Ugwu who was one of the delagates, shared his experience how he was beaten and left with swollen eyes.

He said: “I came here as a delegate from Kubwa for our party, APC primaries for the the House of Representatives, AMAC /Buari Federal Constituency.

“After accreditation, some of our party members who didn’t want me to vote for the aspirant of my choice attacked me. I was beaten and all my belongings were collected from me.

“I don’t have anything to say because I Know that our party will take the right decision in dealing with those who perpetrated the evil act because I can’t imagine a party member fighting with his fellow party member.

“But my happiness is that at the process of the voting, I was able to vote for my choised aspirant, Abuzarri Suleiman Ribadu and he won . He is the one to fly our party, APC flag for House of reps, 2022,” Ugwu said.

He therefore used the opportunity to appeal to Sen. Abdullahi Adamu Candido as well as other aspirants to work with Abuzarri to deliver the party in 2023.

Also, speaking on the sidelines of victory and dehumanization of delegates, Alhaji Sanusi Zubairu, Chairman of Hausa/ Fulani, narrated the ordeal of the hoodlums who invaded the venue of the election.

He said: “This is the moment that we have always been waiting for. We came, we voted and it was transparent because INEC, Delegates and Security personnel were all on ground to ensure that the process was transparent. But for the hoodlums who tried to disrupt the process, may God almighty reward them accordingly.

In his remarks, Comrade Ahmed Shehu appreciated delegates of Abuja and Buari Municipal Council for the voting, Abuzarri Suleiman Ribadu to represent Abuja/ Buari Municipal area Council in the FCT.

He commended the delegates for voting for Abuzarri, assuring that he would deliver on his mandate.

Addressing his supporters and the delegates, Abuzarri Suleiman Ribadu, sympathized with those who were injured, wishing them a quick recovery.

He also admonished his supporters to remain calm while expressing optimism that victory was assured in the general election.

Abuzarri Suleiman Ribadu is a two time member of Adamawa State House of Assembly, Yola South, and was also two times SA to the Adamawa State Governor and SA to a Minister of FCT, Abuja.

Dambazau Defects From APC, Says Its Time To Move On.