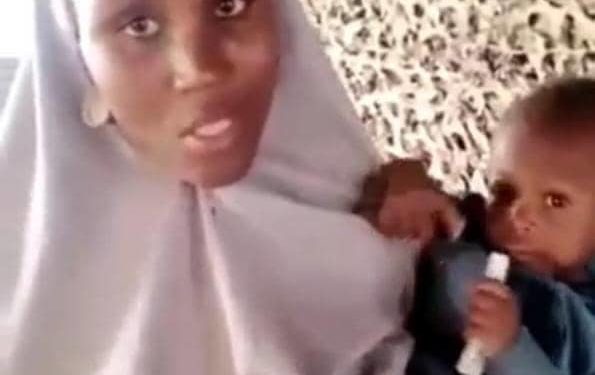 The Nigerian Army has rescued another Chibok schoolgirl, Ruth Bitrus, who was kidnapped alongside many others from Government Girls Secondary School Chibok, in Borno State, on April 14, 2014.

An intelligence report obtained by  Zagazola Makama, a Counter Insurgency Expert and Security Analyst in the Lake Chad, from top  military sources, which was made available to our correspondent, showed that Ruth and her son were  rescued by the Troops of 21 Army Armoured Brigade in Bama, Borno State on Wednesday, June 29, 2022, after she escaped from the Boko Haram enclave in the axis of Bama local government area of the State.

While recounting her ordeal, Ruth said that she escaped from Sambisa forest eight years after she was kidnapped from her school in Chibok town by the Boko Haram terrorists.

She said that her terrorist ‘husband’ was killed by a bomb while trying to plant it against the troops of Operation Hadin Kai in the North-East.

Ruth added that other schoolgirls were still with their captors in Sambisa Forest.

“It took me three days to escape from the insurgents’ enclave. I took some food with me for my child. Some of the Boko Haram saw me while I was coming out but I ran to the bush to avoid being arrested,” she said.

Recall that two weeks ago, the Troops had rescued two Chibok schoolgirls, Mary Dauda and Hauwa Joseph, after they escaped from  Gazuwa camp, the acclaimed headquarters of the Jamā’at Ahl as-Sunnah lid-Da’wah wa’l-Jihād, a Boko Haram faction, formerly known as Gabchari, Mantari and Mallum Masari, located about nine kilometres to Bama LGA of Borno State.

Their escape was as a result of the sustained massive offensives by the troops of Operation Hadin Kai, which resulted to hunger and displacement in the terrorists’ enclaves.

LEADERSHIP reported that Boko Haram kidnapped 276 female students, aged between 16 and 18 from the Government Girls Secondary School in Chibok, Borno State in April 2014.

Over 100 of the schoolgirls were still unaccounted for eight years after they were kidnapped by terrorists.