As PDP Braces For Tough Outing In 2023

John Mkom, writes on changing political tide in Taraba State ahead of the 2023 poll.

by John Mkom
in Politics
0 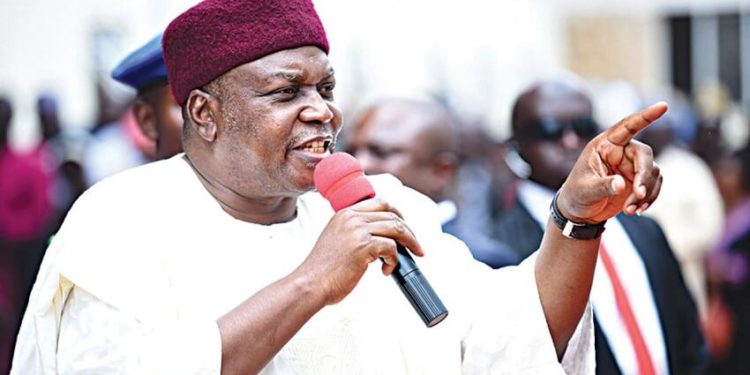 As the 2023 general election approaches, indications are that the Peoples Democratic Party (PDP), the ruling party in Taraba State, may for the first time since the return of democracy 1999, become the opposition party.

Taraba State has been a PDP stronghold since 1999, it is the only state in the North East region where PDP has ruled since this democratic dispensation. Although the party came close to losing the state in 2015 with the President Muhammadu-inspired All Progressive Congress (APC) tsunami, PDP managed to retain the state.

But the political arena is changing fast. Although the political shift heralded the PDP primary elections, it intensified after the exercise with PDP big wigs moving to other political parties particularly to the major opposition, APC.

The crisis within PDP heightened with the emergence of Lt. Col. Agbu Kefas (rtd) as their governorship candidate from Wukari. Regarded by some as not so grounded politically in the state, the recently retired military officer was elected less than a year ago to succeed Victor Bala Kona as the PDP state chairman.

His emergence as the governorship candidate sparked more upsets within the party, especially against the backdrop of allegations that he emerged as candidate through a questionable process. Some aggrieved PDP governorship aspirants have since gone to court to challenge his candidature.

However, the incumbent and PDP leader in the state, Governor Darius Ishaku, started losing ground from his geopolitical zone (Taraba South) when one of its political gladiators and former Senate deputy minority leader Emmanuel Bwacha decamped to APC. Bwacha represents Taraba South.

Ishaku also lost grassroots politicians from his hometown, Takum local government area, who were reputed as influential to PDP victories in the geo-political area over the years. One of them is former speaker of the Taraba State House of Assembly, Hon. Mark Bako Useni, who is the incumbent member representing Takum I at the House of Assembly.

The member representing the governor at the state house of assembly (Takum II) Hon. Samson Ajia, is also not with the governor since after the recent primary elections. Ajia, who prefers not to defect to APC, is aggrieved that the governor worked against his plan to return to the state assembly. The ticket was handed over to Tanko Yusuf, the governor’s preferred aspirant.

However, a clear indication of what’s to come for Governor Ishaku manifested recently. He presented three local government council chairmen, namely Nashuka Ipeyen, Donga, Shiban Tikari, Takum II and Daniel Adigrace, Wukari II both for the state house of assembly primary elections. But all of the three serving local government council chairmen lost their ticket to those against the governor under PDP in the southern zone.

The governor won the Senatorial ticket for the southern zone. But the governor would be up against the combined force  of Sen Bwacha, from Donga, one of the local governments in the district even though he will be contesting the governorship ticket on the APC platform; and Hon Mark Useni who is APC House of Representative candidate for Takum, Ussa and Donga federal constituency.

But there is more. The governor also has Sen. Joel Danlami Ikenya to contend with, within the zone. Ikenya, a former federal and state lawmaker, was also a former minister and three-time governorship contestant from Wukari local government area which is the largest local government in terms of voting strength.

Ikenya contested the recent PDP governorship primary election in the state, lost and defected to New Nigerian Political Party (NNPP) to contest for the Senate seat against Gov. Ishaku.

The governor’s main contender for the Senate seat is APC’s Hon. Danjuma Shidi, a member representing Wukari/Ibi at the National Assembly. Shidi and Ikenya are key political figures against the governor and PDP not just in Wukari but the entire southern zone of the state.

Other APC forces within the zone include the former head of service of the federation, Mr. Danladi Kifasi and retired director of finance in the National Assembly and member North East Development Commission (NEDC) Chief David Sabo Kente.

As it stands, the governor and his party, PDP, are set for a tough outing within the southern zone in 2023.

In this zone, Gov. Ishaku and the PDP lost a bigwig Dr. Abdumunini Vaki to the cold hands of death. Vaki, the former chairman of PDP in the state was from Sadauna local government area of the state. He was a strategic mobiliser and grassroot politician from the central zone.

PDP hardly wins in the Taraba Central zone, especially federal and state legislative seats. However the presence of Vaki, Hon. Peter Abel Diah, Hon. Gembo Meikudi, Hon. David Fuo were forces that PDP used to depend on for success in all elections.

However, Hon David Fuo, member house of representative, representing Sadauna, Gashaka and Kurmi at the National Assembly who was elected in PDP platform, has since defected to APC.

Another development that isn’t helping the PDP in the zone is the proposed sale of Mambila Beverages Nigeria Limited, a Tea producing company in Nigeria, owned by Taraba State government. The state government recently advertised the privatisation of the company, a development that has created wide criticism.

The people of the zone who are the most beneficiaries of the company are accusing the governor of having vested interest in the privatisation process.

The central zone is where APC are planning to consolidate their strength and garner majority votes to defeat the PDP since the area contains three large local government areas (Gasol, Bali and Sadauna LGAs) where massive votes have always been harvested in general elections.

The people of the zone had before the recently concluded primaries agitated for power shift from southern zone to their zone. With that desire not met, they had taken a position against the governor and PDP for retaining the candidature of the PDP in the south after governing the state for eight years.

Elders from the zone who had begged for power to return to their zone, accused the governor of using his office to enrich his zone with political opportunities while he abandoned them even though it was their turn to rule from 2023.

“The governor has abandoned us after the huge support we gave to him against our sister late Sen. Aisha Alhasan (Mama Taraba) both in 2019 and 2015 governorship elections, he has proven to us that he has no interest in fair sharing.

“We are going to shock them with our voting strength this time around by voting against the PDP, that’s the reason why we have asked our son, Hon. Baido Tijos, who is a serving member of the House of Representatives to dump PDP and pick the governorship ticket of the SDP.

“PDP should not expect any block vote from the north again since they don’t have the spirit of give and take,” Elder Kunshi Aminu and Hon. Joseph  Lau who bare their minds to LEADERSHIP revealed.

However, pundits and PDP supporters aver that the window of reconciliation is still available to sort out some of the challenges. How prepared the voters are to pitch their tents with another party other than PDP will be known in a matter of months.

39,000 PVCs Ready For Distribution In Niger