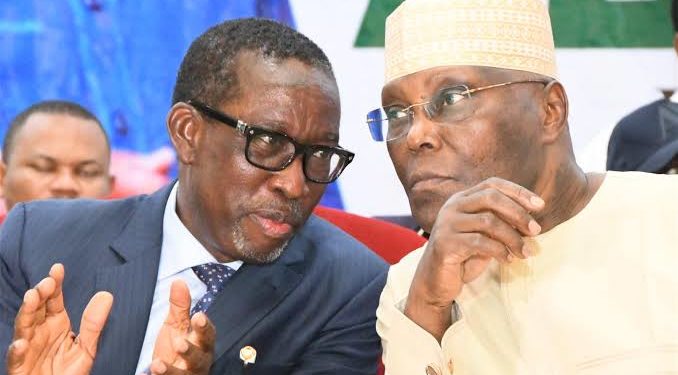 The presidential campaign of former Vice President Atiku Abubakar has taken steps to move beyond the animosity that followed his victory at the People’s Democratic Party’s presidential primary and the choice of Delta State governor, Ifeanyi Okowa as his running mate.

Even before the official campaign period kicks off, the PDP presidential candidate has faced a myriad of problems that has bogged down his campaign and instead of subsiding, has only increased with several governors still suffering from the hangover of losing out in the political contest.

The Atiku Abubakar campaign however appears to have lost patients with the intransigence of Governor Nyesom Wike of Rivers State by making a direct appeal to members of the PDP and all well-meaning Nigerians.

Wike was defeated by Atiku at the PDP presidential primary held in May and was then overlooked by Atiku for the position of the vice-presidential candidate. The Rivers governor has been inconsolable ever since and has refused all appeals to accept the party choice of a presidential running mate.

In a short video posted on social media by the Delta governor introduced himself to the Nigerian public saying, “My name is Dr. Ifeanyi Author Okowa, the vice-presidential candidate of the people’s Democratic Party. Please join me as I invite you on this mission to restore peace, unity and prosperity to our great country, Nigeria.”

He said there is probably no time in the history of our country that the demand for good leadership is more compelling than the times that we are living in.

Our land, he said, “continues to dig deep in the throes of disunity and our economy keeps breaking away from the reach of everyday hardworking Nigerians.

“The scale of insecurity and the toll it takes on the peace of this country will require that we all roll up our sleeves to fight for peace to return to Nigeria. I am an incurable optimist in the power of democracy as an agency for progressive change.”

Okowa said, “the world that lies ahead of us in rescuing this country must begin with the task of electing a new president who will rally the country to a brand-new direction.

“For me, being on the ticket with Atiku Abubakar, the presidential candidate of the People’s Democratic Party, is an opportunity to play a role in resetting the trajectory of Nigeria back to the path of growth, prosperity and peace.”

He said, “it is not a role that I can play alone. That is why I am inviting everyone within the PDP and all well-meaning Nigerians to join hands with me in giving our utmost support in ensuring that we do our best for this country, at these trying times.”

A spokesman to Atiku Abubakar however denied that the short video posted on social is an attempt to send a coded message to Wike and all those standing by him that the Atiku presidential campaign is forging ahead with or without them.

He also denied that the campaign team is trying to break the cycle and bad publicity that is threatening to undermine it even before it faces the ruling All Progressives Congress for the hearts and minds of Nigerians.

He LEADERSHIP Sunday that there is no attempt to change the subject from the inability to placate the Rivers State governor. Instead, he said, the speech by Okowa is to rally members of the PDP and Nigerians.

Ibe also dismissed media reports that Atiku had sent an emissary to the Rivers governor, who until Sunday, was in Turkey on a six-day holiday.

In a tweet on Friday, Ibe said the report that H.E @atiku sent an emissary who was shunned by Gov Wike is at best hogwash.

He said, “The @OfficialPDPNig presidential candidate did not send any emissary to Turkey. Those trying to create a wedge between the leaders do not mean well for the PDP and Nigeria.

“I wish to assure them that all extant issues with the Rivers State Governor and other aggrieved leaders will be amicably resolved so that the party can focus on booting out the ruinous APC administration and commence the arduous task of reconstructing our nation.”

He however was not the only one to play down the speech as an attempt to move on and close the chapter of nomination of a running mate.

A close aide of Governor Okowa has however said the speech by his boss on his Instagram page is not meant to undercut anybody or aggrieved politicians who still want the grievances addressed before any campaign starts.

He said, the address by the Delta governor is not a campaign but rather his manifestos.

In a telephone conversation Sunday with LEADERSHIP Correspondent in Asaba, he stated that it was not seen on television nor people moving around with campaign posters and the likes.

“Did you see it on any television, did you see people moving around? That is not a campaign. When they were doing primary  election did you not see people visiting?

According to him, the lndependent National Electoral Commission, (INEC) believe is that you cannot go to TV now and be saying vote for this and that. “So you think somebody cannot say support me? He is telling you about the Nigerian he believes in and what will make it possible.

“Did you watch it in AIT? Even if you watch it there the man did not say vote for Atiku or Okowa. He is telling you this is the Nigeria he sees, that we should all work together for a better country. That he is inviting all Nigerians to support Atiku to be able to deliver our country.

While reminding him that INEC has not lifted campaign on campaign, the aide retorted that it is INEC that should be sued if they beleive that somebody has started campaign. “Are you not seeing Tinubu and others moving round? For somebody to say he wants to rebuild Nigeria, it is not a campaign”

“When campaign starts you will see musicals, you will see it on TVs for more than 50 seconds to one minutes, you will see shouts of PDP, power to the people, vote for Atiku and others but for someone to be telling you his manifestoes, thanking Nigerians and telling you what he wants to do is not campaign” he explained.

Prominent stakeholders of the Peoples Democratic Party (PDP) in Rivers State, have told the party and it’s presidential candidate, Atiku Abubakar, to get ready to fail in the 2023 election if they do not seek the contributions of Governor Wike.

Speaking with LEADERSHIP Sunday in Port Harcourt, former member of the House of Representatives, Chief Ogbonna Nwuke, said the PDP was supposed to build coalition to ensure the party’s victory in 2023.

Nwuke said: “If they want to go for campaigns without Governor Wike, we wish them luck. They are supposed to build some kind of coalition that will deliver victory to PDP in the forthcoming elections.

“Then, if there is somebody that is not needed to rebuild the party to the next level, then, there is no need to pretend.

Evidence of the pretence is somehow showing at this exclusive decision.

“But one thing is certain, Governor Wike and his friends are not ready to beg anybody to contribute to the success of the PDP. They come from states, they belong to states and they will take necessary steps in their states, hopefully in the interest of their party.”

Also speaking with LEADERSHIP Sunday, a former Rivers State Commissioner for Information and Communications, Hon. Emma Okah, said the PDP would be shooting itself on the foot if it fails to consult Wike.

Okah said: “I don’t have any information to that effect, but that will be a great risk. First of all, I don’t have that information but to even thinking of that is unimaginable because of his substantial contributions to the development of the party and because of the advantageous position he occupies as one of the best materials that participated in the last national convention.

“Don’t forget that he came second after former Vice President Atiku Abubakar and that is no mean achievement.

“So, I do not imagine that PDP will want to shot itself on foot as it were. So, we still leave it under speculations because I don’t see any party that want to win an election come 2023 at the national level will think of ignoring the contributions of Governor Nyesom Ezenwo.”