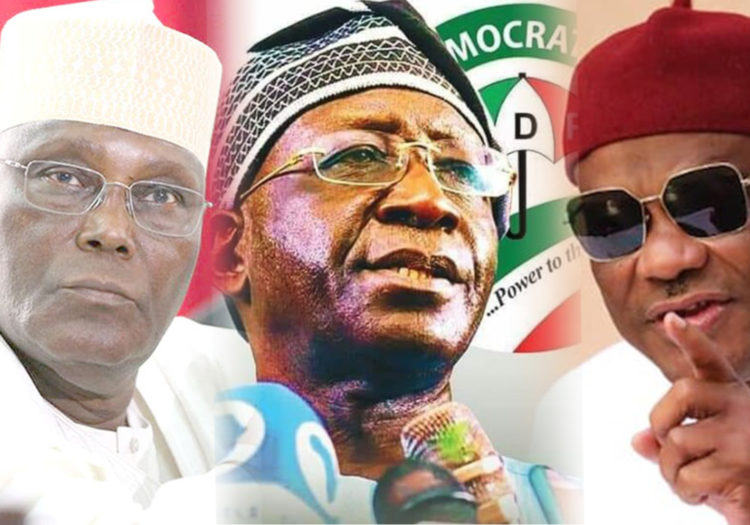 It is time Governor Nyesom Wike apply the brakes. It is time to move forward. It is time to talk as a family and put the past behind. It is time to swallow and refresh for the future. Governor Wike should not take the issues too far thereby creating the impression that the presidential contest for him was a do or die affair. With the way he is talking and taking up the issues, no Nigerian will believe that his grievances have nothing to do with his defeat at the polls. He must have prepared so well without imagining any margin of error of loss and therefore the loss is huge.  Raising many issues at this time only adds to such impressions of desperation against him. No one ever fights it alone this way. It is the nature of politics to gang up for or against an interest so he should take it easy.

As a highly respected leader within the party and in the country, he should be more concern about progress rather than destruction. As a leader in the PDP, his priority must be victory for the party. His tenure will end next year and if he pulls down the house that has elevated him for many years just because of certain irreconcilable matters, posterity will hold him and those supporting him accountable. Let the party focus on how to win next year’s general election from top to bottom. Its time to keep the past behind and forge ahead to redeem Nigeria  from the woes inflicted by the ineptitude of the Apc government. Many things have happened and will continue to happen in politics. They will keep changing and to think they will work in your favor all the time is to deceive oneself. To me, the governor is blowing matters out of proportion.

The recent drama by some members of the National Working Committee, NWC to return some allowances paid to them, is nothing but a deliberate act aimed at distracting and embarrassing the party. It is not against the national Chairman, Dr Ayu but the entire party. Its not done in good faith and shamefully, it  was perpetrated by people elected to oversee the affairs of the party. It is most dis-honorable and shameful for men of such status  to do that for whatever reason.  It was a curious tales by moonlight sort of a charade when the deputy national chairman, DNC south, Taofeek Arapaja, south west zonal chair Olasoji Adagunobi, south south zonal chair ,Dan Orbih, the national women leader, Prof Stellah Effah-Attoe, South-East zonal chair, Alli Odefa, and Setonji Koshoedo returned their allowances to the coffers of the party with a covering letter two weeks after they silently received the monies.

They made it look like it was a bribe advanced to them by Dr Ayu so as to score a cheap political objective. The monies, said to be their aggregate housing allowances together with their aides, were said to have been approved by the NWC and paid to them on 14th of September quitely. About two weeks after, they decided to return the money and this time, openly. It baffled not a few analysts as to why only 6 out of 26 persons would return monies paid to them as emoluments. The coincidence of the 6, especially that they are the few close allies of the Rivers state governor in the working committee speaks volumes to many issues. Who are they seeking to impress and who do they want to destroy?  Why taking the matter to the press and for whose attention? By their actions, Arapaja and co have fallen short of the expectation of leadership placed on them by the millions of party faithfuls.

They have instead, tried to sow seeds of discord and division within the rank of the party instead of contributing to resolving any crisis within the fold. They have lost respect before the people they claim to be leading. Checks at the national secretariat of the party revealed that all the allegations of bribe and questionable monies advanced by the 6 are nothing but politically induced drama to get at something. As critical leaders of the party, what is expected of them was  a report to the NWC for investigation, that is if they don’t know. The resort to the press instead with an open letter to the Chairman was done to create a negative impression, and then pile accusations against Ayu. But thanks to the eagle eye of party faithfuls who quickly decipher the intentions. I believe that this is not the first time they were collecting any allowances from the party through the same process.

Why did it take them so long to return the monies? What of the coincidence of doing that on the same day through different bank channels other than the same channel of receipt? Why are they returning drafts instead of just transferring the monies back? Does it mean they had used the monies and later received fresh ones from somewhere before returning them? And why should they accompany that with a letter and leaked same to the press when as NWC members, they can  quietly meet and ask questions? These questions and more, need to be answered by the 6 NWC members who seems to be playing a kite to embarrass the party, the national chair and the presidential candidate in order to escalate the crisis beyond proportion. The explanations of the 6 does not add up at all. The monies did not emanate from the personal account of Dr Ayu neither was it sent back to his personal account. Is that not a breach of the oath of secrecy and allegiance they took while being sworn in?

It is open knowledge at the secretariat that the request to seek approval for the said monies was pushed by some of the 6  persons who put pressure on Dr Ayu to consider their accommodation. Ayu was said to be reluctant but their pressure made him to allow debate on the matter until the entire NWC approved the money. What is the objective of making an internal matter public? In whose interest was it been done? Can 6 out of 26 form a quorum to take or challenge a decision? Let the records of minutes of previous meetings be made public and let the public know what actually transpired.

At the end of this drama, I don’t know what the 6  will explain to their people and Nigerians. This is because there is nothing wrong or strange about the allowances paid. The party is a structured institution with regulations ,laws, code of ethics and bureaucracy as any other organization. The funds couldn’t have been bribes or questionable payments. They are legitimate housing allowances not peculiar to this NWC. They are contained in the party’s conditions of service in which all staff and aides of the NWC officials are also included. It was a collective decision agreed upon after several NWC deliberations because the various sums in question are above the approval limit of the national chairman. It will do the party a lot of good if those involved are investigated and disciplined to serve as deterrent within the party. Nobody should be seen to be above the party and the earlier this is done, the better. If such top officials of the party, trusted with huge leadership responsibilities  can be used to be involved in such pedestrian and petty  politics, then adequate surveillance is required to beef the party’s net ahead of the 2023 general polls.