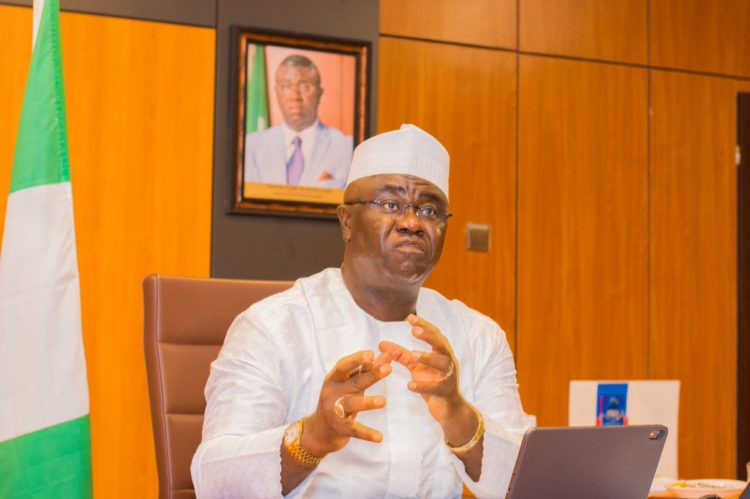 The federal government has blamed the high poverty rate in the country on the failure of the State governments to contribute their quota of development responsibilities.

Minister of State for Budget and National Planning, Clement Agba, disclosed this to State House correspondents on Wednesday after the weekly Federal Executive Council (FEC) meeting presided over by President Muhammadu Buhari at the Presidential Villa, Abuja.

LEADERSHIP recalls that the National Bureau of Statistics (NBS) recently disclosed that 133 million Nigerians were poor.

Agba was responding to a question demanding to know what he and his colleague, the Minister of Finance, Budget, and National Planning, Zainab Ahmed, were doing to ameliorate the biting hardship being faced by a majority of Nigerians at the moment.

According to him, the federal government, through many of its social security programmes, has been dedicating resources to alleviating hardship on the public, noting that state governments, which have been consistently receiving their shares of national resources, had been misdirecting the resource to project that has almost no direct effect on the needs of the people.

He said that 72% of the poverty in Nigeria is found in the rural areas, which he said had been abandoned by governors.

The minister added that the state executives preferred to function in the state capitals.

He lamented that state governors were concentrating on building flyovers, airports, and other projects that are visible in the state capitals rather than investing in areas that directly uplift the standard of life of the people in the rural areas.

Agba pointed out that while states are in charge of land for agriculture, they do not invest in them for the desired effect on their rural citizens.

He, therefore, advised the state governors that rather than concentrate attention on the building of skyscrappers, flyovers, and bridges, they should focus on initiatives that can pull the majority of the people out of poverty.

He said: “question was, what is the Minister of Finance and I are doing with regards to hardship in Nigeria, right?

“So the suggestion is that both of us are the ones creating the hardship for us to resolve it.

“In the first place, I just returned this morning from Brussels where 106 countries – 27 countries from Europe and 79 countries from the Organization of African Caribbean and Pacific countries. What was the deliberation on? Basically, how should the world over tend to do around food and energy and energy crises?

“I think that it’s always good for us to put things in the right perspective. Like I say to people, when you say government, we should be able to specify which government we are talking about. Is it a federal government? Is it a state government or is it a local government? Because we all have different responsibilities.

“And it is for this reason that last year we started some work on the multidimensional poverty index, for which we recently released the report and it was launched by Mr. President.

“To say in the past, we’ve always looked at monetary poverty. But poverty like we know has different pieces, different intensities, and different causes. And it is for this reason, I went around the 109 senatorial districts in Nigeria, to carry out those surveys and to be able to say specifically, where this hardship is.

“The result clearly shows that 72% of poverty is in rural areas. It also showed clearly, that Sokoto State is leading in poverty with 91%. But the surprising thing is Bayelsa is the second in terms of poverty rating in the country. So you see the issue is not about the availability of money. But it has to do with the application of money.

“In the course of working on the national development plan, we looked at previous plans and say why they didn’t do as much as was expected. We also looked at the issues of the National Social Investment Programme.

“At the federal level, the government is putting out so much money but not seeing so much reflection in terms of money that has been put in alleviating poverty, which is one of the reasons the government also put in place the national poverty reduction with growth strategy.

“But if the federal government puts the entire income that it earns into all of these without some form of complementarity from the State governments in playing their part, it will seem as if we are throwing money in the pond.

“Right now 70% of our people live in rural areas, they produce 90% of what we eat. And unfortunately, 60% of what they produce is lost due to post-harvest loss and it does not get to the market.

“When we’re talking about food prices like I mentioned right now as driving inflation, prices of food at the farm gates are low. But when you now take it to the urban areas, you find out that the prices are high due to supply chain disruptions, and lack of infrastructure to take them there.

“I think from the federal government side we are doing our best. But we need to push that rather than governors continuing to compete to take loans to build airports that are not necessary where they have other airports so close to them.

“Or governors now competing to build flyovers all over the place and we applaud them, instead they should concentrate on building rural roads so that the farmers can at least get their products to the market.

“And you find that if they do that and with the new policy in the national development plan that talks about taking power to the rural areas, especially of off-grid power that can easily be put, you begin to attract industries to those areas for value addition.

“UNIDO report shows us in terms of employment, the MSMEs employ 70% of our people. So you can imagine how much progress we will make when you find that there are roads, there is power in these rural areas.

“In terms of agriculture, you find out that the federal government doesn’t have land that they would plant, the government has pushed for the Anchor Borrowers program and that is going on very well but the states control lands. They are the ones to provide land for agriculture.

“They are not investing in that. They would rather build skyscrapers in a city where people will see and clap but the skyscrapers do not put food on the table.

“Like I always say, if you look at Abraham Maslow’s hierarchy of needs. He says you have to take care of the basic needs of individuals first before you begin to talk about self-actualization. So we need to take care of the issues of food, nutrition, housing, and clothing for our people before we begin to think of how to go to the moon and begin to build flyovers and airports in the state capital, that is the missing link which we need to push so that we’ll be able to catalyze growth.

“But continuing to say federal government or my sister, Zainab, and I what are we doing? We are doing our parts. And I’m sure Wike told you guys about monies that have been released over N500 billion to the oil-producing states and I’ve seen some disclaimers from the states saying, it is small money they are getting every month.

“And some are giving some half-truths about what they have received. We need to hold them accountable. So that together we all can grow our economy,” the Minister said.