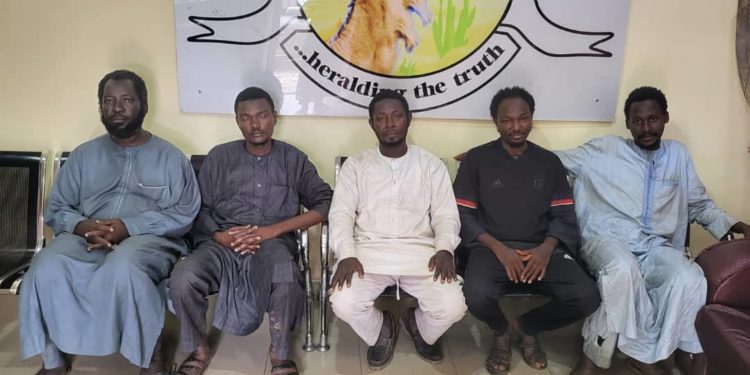 The 5 freed kidnap victims in Kaduna on Tuesday after their release. Credit: Desert Herald

Another batch of five of the Abuja-Kaduna Train passengers kidnapped in March 28 train attack, have regained their freedom.

Kaduna-based newspaper publisher, Malam Tukur Mamu (Dan-Iyan Fika),  who voluntarily engaged in negotiations for the release of the train victims but later backed out due to threats to his life, personal integrity and lack of support from the Federal Government, confirmed the release of the five passengers.

Mamu said all the five released victims were in his office on Tuesday afternoon immediately after their arrival in Kaduna to thank him for his past efforts.

On Monday, July 25, 2022, three of the abductees were released, just two days after the terrorists holding them released a video of the abducted passengers and were seen being flogged by their abductors.

2023: North-East Will Vote For President, Not Vice President – Kudla

2023: North-East Will Vote For President, Not Vice President - Kudla