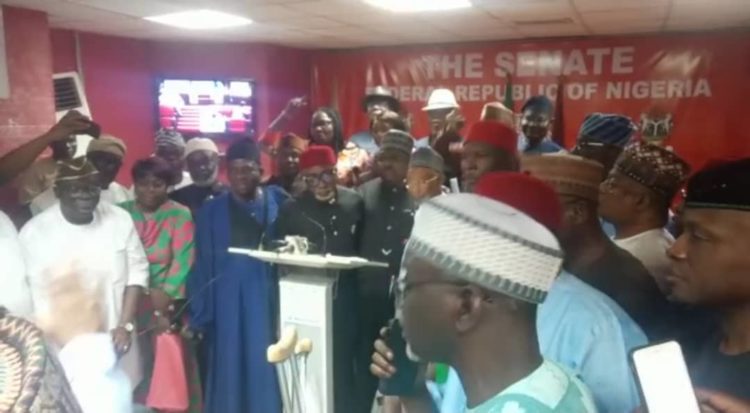 Senators cutting across party lines, on Wednesday, issued President Muhammadu Buhari a six-week ultimatum to resolve the worsening insecurity in the country or face impeachment.

According to the Senators, they have given the president all that he needed to tackle the security challenges but that the issue kept getting worse even in the Federal Capital Territory (FCT), the seat of power.

The Senators’ resolution came after a closed-door meeting with the Senate leadership headed by the Senate President, Ahmad Lawan, which lasted for about two hours in the red chamber.

After the closed-door meeting, the Senate President blocked move by the lawmakers to present their resolutions on the impeachment of Buhari over insecurity at plenary, a development which angered the Senators, who consequently staged a walkout to address the Senate Press Corps.

“At the closed session, we agreed to give him (Buhari) an ultimatum of six weeks after which we will impeach him. But the Senate President blocked us.

“Nowhere is safe in Nigeria, even Abuja. Urgent steps need to be taken and we left the chamber because we’ve given the President six weeks to resolve the issue or we impeach him.

“We’ve given all the appropriations, resolutions and the support he needs. Our next line of action is to impeach him,” the Senate Minority Leader, Senator Philip Aduda, told journalists on behalf of other Senators.

LEADERSHIP observed the presence of Senators of all divides at the press briefing. They include a lawmaker from the ruling All Progressives Congress (APC), Senator Adamu Bulkachuwa; many Senators from the major opposition Peoples Democratic Party (PDP) led by Senator Aduda; Senator Eyinnaya Abaribe of the All Progressives Grand Alliance (APGA), and Senator Ibrahim Shekarau of the New Nigerian Peoples Party (NNPP).