by Our Correspondent
in World News
0 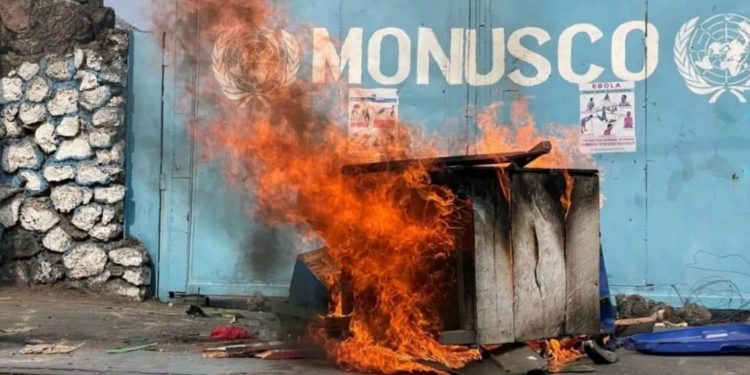 This Monday, July 25, 2022, several hundred enraged demonstrators vandalized and looted the facilities of the UN Mission in Goma, accused of ineffectiveness in its fight against armed groups in eastern DRC, harboring terrorists and colluding with Rwanda, which is involved in an armed conflict with the DRC.

Earlier, on July 18, the United Nations Organization Stabilization Mission in the Democratic Republic of Congo (MONUSCO) warned of the risk of hostile actions against its personnel and infrastructure.

Does it mean that the mission representatives “somehow” knew that it was already engaged in criminal actions against the Congolese people?

In fact, this is not the first time we have seen the involvement of UN peacekeeping missions in criminal actions in Africa. The people of the Central African Republic were the first to reveal the misdeeds of the UN.

According to several testimonies of ex-combatants of former rebel groups in the Central African Republic, some contingents of the United Nations Multidimensional Integrated Stabilization Mission in the Central African Republic (MINUSCA) were delivering arms to armed groups during the conflicts in the country. Besides, some peacekeepers are involved in ivory, gold and diamond trafficking, in other words, the looting of resources.

Furthermore, the same pattern is being followed in Mali. On July 10, 2022, the Transitional Government of Mali announced that it had arrested forty-nine (49) Ivorian soldiers at the international airport in Bamako, including thirty mercenaries.

Following their arrest, Malian intelligence services were able to conclude that the recruitment of such personnel allows the United Nations to set up a system of smuggling, to plunder the countries’ resources and to fuel armed conflicts by transferring weapons to terrorists and criminals.

Now it is the DRC’s turn to learn the truth about the UN. After being accused of inaction in the face of insecurity, harbouring terrorists and colluding with Rwanda, MONUSCO only expressed “concern” about the increase in “hostile rhetoric” against peacekeepers, not their own crimes. But the people wanted justice.

Having barricaded the main streets of Goma, the protesters stormed the local MONUSCO headquarters and its logistics base outside the city center. All mission personnel present at the site were evacuated aboard two helicopters. Obviously, the peacekeepers did not want to answer to the Congolese people for all the misdeeds committed.