by Agency Report and .
in Politics
0 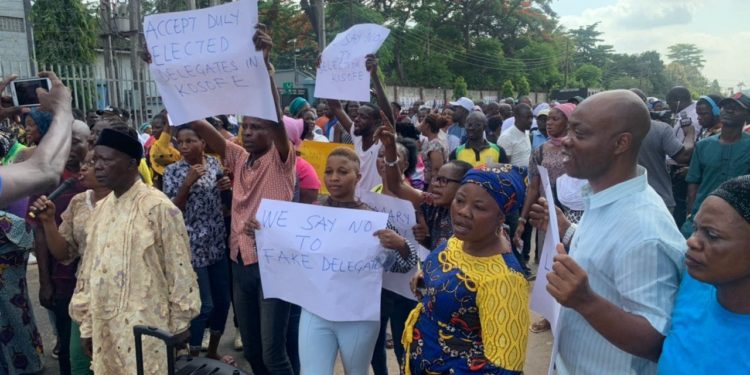 Members of the All Progressives Congress (APC) in the Kosofe local government area of Lagos State, have protested the imposition of candidates for the 2023 elections in the recently concluded primary elections in the state.

Ogbara Kafilat, a former Commissioner in the Lagos State Audit Service Commission, polled 44 votes to beat her closest opponent and incumbent of the House of Representatives representing Kosofe federal constituency, Hon. Rotimi Agunsoye, who had one vote.

The protesters accused the national leader of the party, Asiwaju Bola Ahmed Tinubu, and other leaders of the party in the state of being behind the alleged imposition of some candidates on them.

Announcing the results of the exercise held at Ikosi-Isheri Local Council Development Area (LCDA) secretariat, the chairman of the panel, Fuad Oki, said, “By the powers conferred on me, I want to announce Hajia Kafilat Ogbara as the candidate of the All Progressives Congress for Kosofe Federal Constituency, after scoring the highest votes of 44. She is hereby declared the winner and returned elected.”

Meanwhile, the constituents have demanded an extension of Hon. Agunsoye’s tenure.

The members of the party, who flooded the streets on Thursday, alleged that party leaders disregarded the results of the primary elections and instead recognised candidates who lost out.

They carried placards bearing various inscriptions such as, “We are the grassroots, we own power of votes”, “Accept duly elected delegates in Kosofe”, “We say no to fake delegates”, “Grassroot voice is power, listen to it”, “We want justice in Kosofe, return the delegate list we voted for”.

Also, some of the protesters were heard saying in Yoruba, “We want our guarantor.”

One of them said, “We believe in equity, justice and fairness, our leaders should come and explain what happened because we didn’t vote for Kafilat. I witnessed the election in seven wards and we voted for our candidates but we didn’t know what happened behind the scene.

“They should understand that democracy is not imposition. If we cannot elect our representatives, our leaders are biased and compromised.”

According to them, the party leaders have been induced by the candidates who lost out in the last primaries.

2023 Census: NPC To Map Out Special Populations For Coverage

PDP Says No Plan To Buy Votes In 2023 Elections

INEC Threatens To Cancel Any Election Disrupted By Hoodlums