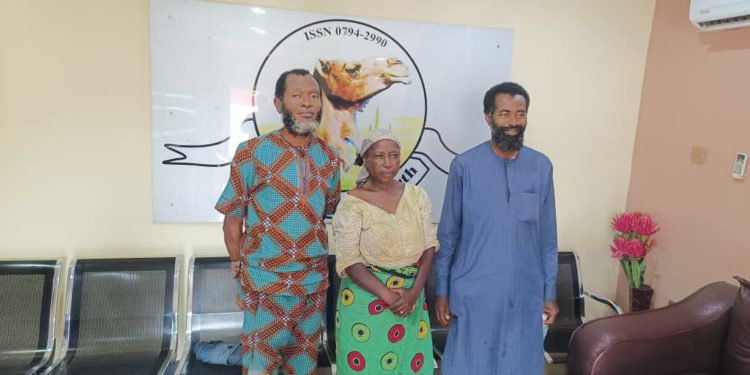 Four more kidnapped Abuja-Kaduna Train passengers have regained their freedom from terrorists who kidnapped them alongside several others on Monday, March 28, 2022.

Three of them were released on Monday, according to a source privy to the negotiations leading to their freedom from terrorists’ den while the fourth person was released about six days ago.

The kidnap victims include Oluwatoyin Ojo, Hassan Lawan, and

Hassan was one of the kidnap victims who spoke in the latest video released by the terrorists on Saturday, where he called on the international community to come to their aid in captivity.

The trio release comes about 48 hours after the terrorists released their latest video where they were seen flogging the kidnapped passengers.

The video has drawn widespread anger and outrage among Nigerians.

LEADERSHIP reports that 24 of the passengers have been released so far in six batches beginning with the Managing Director of the Bank of Agriculture, Hassan Alwan, who was released few days after the attack.

The terrorists later released a pregnant woman afterwhich a Kaduna-based publisher and media consultant to Sheikh Dr. Ahmad Gumi, Malam Tukur Mamu, became the lead negotiator with the terrorists for the release of the remaining passengers.

The terrorists threatened to kill the remaining hostages except the federal government meet their demands, including releasing their detained fighters both convicted and those awaiting trial.

The Boko-Haram terrorists later attacked the Kuje Medium Security Custodial Centre in Abuja, releasing hundreds of inmates including 69 of them facing terrorism charges.

Meanwhile, the latest released tree passengers have arrived Kaduna and will be reunited with their families shortly.

LEADERSHIP reported that the remaining kidnapped passengers of the Abuja-Kaduna Train have called on the international community to help intervene on their plight and secure their release from terrorists’ captivity.

Recall that the Abuja-Kaduna Train was attacked by terrorists on the night of Monday, March 28, 2022 where nine passengers were killed, many abducted while a number of others were rescued with injuries.

In the undated latest video released by the terrorists on Saturday and obtained by LEADERSHIP, the terrorists were seen flogging the hostages, which included aged men and women with little children.

In the 10.51 minute-long video, the terrorists threatened to abduct and kill President Muhammadu Buhari and Kaduna State governor, Nasir El-Rufai.

The terrorists also vowed that they would destroy the country, kill the remaining passengers in their custody and sell out the others.

One of the terrorists threatened that unless the government comply with their demands, they would turn the area into an abattoir.

“This is our message to the government of Nigeria and just as you have seen these people here, by God’s grace, you will see your leaders; your senators and governors will come before us. These ones you are seeing here, we will keep some as our slaves and sell them off just as our Imam told you in the past,” he said.

He further said, “Just like the Chibok girls that were sold off, we will equally sell these ones as slaves. If you don’t adhere to our demands, we will kill the ones we need to kill and sell the remaining. By God’s grace, El-Rufai, Buhari, we will bring you here.”

After the terrorists had spoken, some of the abducted passengers took turns to call on the federal government and the international community to come to their rescue.

They lamented their plight and accused the government of being insensitive, adding that their abductors were more humane and caring in dealing with them.