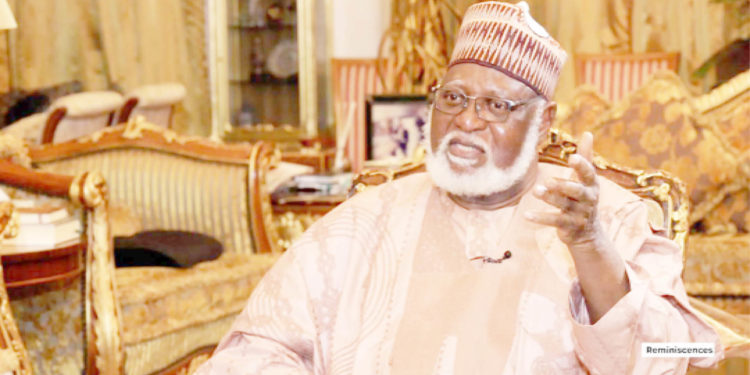 President Muhammadu Buhari has said on behalf of the government and his family has sent warm felicitations to Gen. Abdulsalami Abubakar, former Head of State and Chairman of the National Peace Committee, on his 80th birthday, June 13, 2022.

The president in a statement by presidential spokesman, Femi Adesina joins family members, friends and associates of the former Head of State in celebrating the milestone, taking into full cognisance the historic roles he has played in the unity and peace of Nigeria, and in laying the building blocks of democracy.

Buhari noted the meritorious service of the former Chief of Defence Staff, sacrificing for the country and African continent by participating in peace missions and negotiating for the upholding of democracy across the continent.
He extolled the humility and humanity of the Army General, who chose the noble path by ensuring transition to democratic government in 1999, and midwifed a peaceful handover process in 2015.

On his 80th birthday, the President believes the nation owes Gen. Abubakar debt of gratitude for always putting the interest of the country and its citizens first, and working for the greater good of Nigeria and a better Africa.

Former Vice President of Nigeria and Presidential candidate of the Peoples Democratic Party, Atiku Abubakar has described former military head of State, General Abdulsalami Abubakar as a great Nigerian patriot and an epitome of unity.

In a statement in Abuja to celebrate Abdulsalami on his 80th birthday anniversary, Atiku said the former Head of State demonstrated great patriotism and commitment to unity and democracy by keeping faithfully to his transition timetable in 1999.
According to Atiku, Abdulsalami has also committed himself to the promotion of unity and democracy since leaving office by involving himself in peace building efforts in the country.

“As you celebrate your 80th birthday today (Monday), I’m excited to say that my interactions with you have always been fruitful because I see in you a great fountain of inspiration and a reservoir of wisdom and knowledge,” Atiku extolled the general.
Northern Governors Forum has described the former Head of State Gen. Abdulsalami Abubakar as a man of integrity, patriotism, fairness and justice which have defined his public and private life.

The chairman of the forum and governor of Plateau State Simon Lalong in a statement to felicitate with him on his 80th birthday.
He said Gen. Abaubakar apart from serving the nation actively in the military, rose to the pinnacle becoming the head of State where he steered the ship of the State successfully and played a pivotal role in the democratic process by handing over to a civilian administration in 1999.
The statement which was issued by the director of press and public affairs Dr. Makut Simon Macham, Lalong said Gen. Abaubakar has remained a strong advocate for the consolidation of democracy, accountability and good governance through his engagements under the National Peace Committee where he continues to interact with stakeholders and pursue democratic ideals.

Abdusalami is a member of the 41st Regular Course of the NDA.

The group gave the commendation, while celebrating the ex-military leader, who turned 80 years old, Monday.

The officers described the former Head of the state as a fine gentleman officer and an “accomplished General and seasoned Statesman of repute”.

In a statement by the President and the Publicity Secretary of the Association, Lancelot Anyanya and Faruq Baba-Inna, respectively, the Association stated that the continued existence of the organization was traceable to the commitment of Abdusalami and other officers.

According to the duo, the 33years existence of the organisation as an Alumni Association was due to the excellent work done by the then Brigadier Abdulsalami Abubakar and other very fine senior officers, when he chaired the Armed Forces Selection Board for 41 Regular Course.