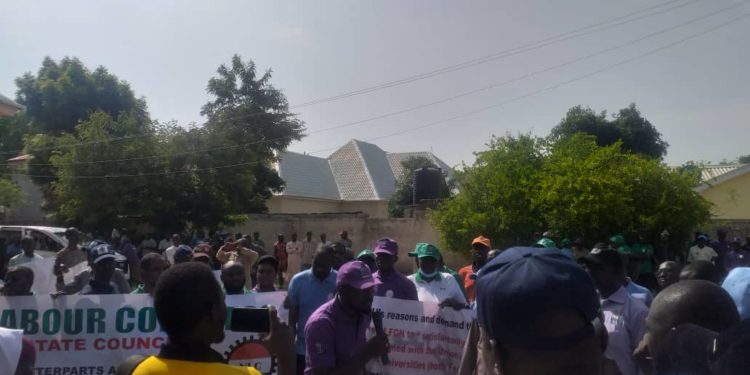 The Academic Staff Union of Universities (ASUU), University is of Maiduguri (UNIMAID) chapter, has accused the administration of President Muhammadu Buhari of playing politics with the Nigerian University Education system.

The UNIMAID ASUU chairperson, Dr Abubakar Mshelia Saidu, said this on Tuesday during the Nigeria Labour Congress (NLC) National Solidarity Rally in support of the Academic Staff Union of Universities (ASUU) strike, held at the NLC secretariat in Maiduguri, the Borno State capital.

Dr. Saidu noted that the NLC solidarity rally was in support of ASUU and other University Unions, following the protracted ongoing strike crippling the Universities, and the Federal Government’s failure to address the issues raised by the Unions with the seriousness they deserve in accordance with the principles of collective bargaining.

He said the NLC was deeply concerned about the far-reaching negative consequences of the lingering crisis in the nation’s University system and other tertiary institutions, adding that the Union also frowned at the cheap blackmail of salary stoppage of the striking workers in the Universities employed by the Minister of Labour and Productivity, Dr. Chris Ngige.

He commended the courage and resilience of members who have shown a strong sense of commitment predicated on principles, noting that it was important to remind members that the collective dignity and the survival of the University system lie in members sustaining this strike to its logical conclusion.

“The government is playing politics with the University education in Nigeria. It is very unfortunate and that is exactly what they are doing. If government wants this problem to be resolved in a day or two at most, it will be resolved. It is very clear.

Also speaking, the president of the Students Union Government (SUG) of the University of Maiduguri, Comrade Ali Fannami, said the strike has forced students to stay beyond their academic years in the University.

He noted that students like him who gained admission in 2015 and are supposed to graduate in 2021 are still in school due to prolonged strikes in the federal University system.

He called on the federal government to, as a matter of urgency, to do the needful in order to end the strike to protect the future of Nigerian students.

7 Incredible Health Benefits Of Strawberries And Why You Should Eat More... Click Here For Details
Tags: ASUUUNIMAID
SendShareTweetShare
Previous Post