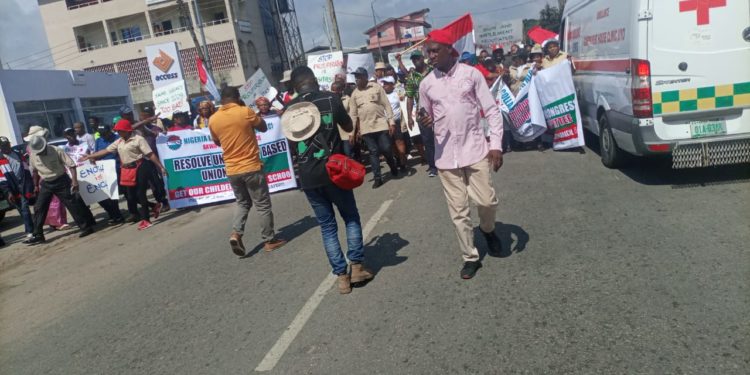 Members of the Akwa Ibom State branch of the Nigeria Labour Congress (NLC), along with other affiliate unions within and outside the tertiary education system, on Tuesday, defied heavy Police presence and marched on to the Government House, Uyo, the state capital.

Led by the national president of NLC, Ayuba Waba, who was represented by the zonal officer, Hon. Uche Nweke and the state chairman, Comrade Sunny James, the workers delivered a message to Governor Udom Emmanuel for onward transmission to the Federal Government to quickly resolve the lingering ASUU strike, to prevent the total shutdown of the economy through a mass action.

Ayuba said the strike became necessary to draw the Federal Government’s attention to the over five-months strike by the University teachers.

“If today we are talking about ASUU, NASU, NATE and other strikes and we know the monies that come around, I have been privileged to be in the House before and I know what am talking about.

“Monies realised from the sale of forms by the two major political parties and others, $200 to $300 paid to delegates are enough to settle the crises in the University system,” the NLC leader said.

The State NLC chair, Sunny James, urged the State Government to be in the vanguard of impressing it on the Federal Government to end the lingering strike once and for all, in the interest of students and national development.

However, Governor Emmanuel represented by the SSG, Dr. Emmanuel Ekeuwem, and the Head of Service (HoS), Elder Effiong Essien, promised to deliver the workers’ demands to the governor, whom they said was out of the State for a function.

Ekeuwem underscored the importance of education as a pivot of development, noting that “education system needed seamless operations to churn out quality graduates to drive system.”

He appealed to the workers for a peaceful rally in order not to jeopardise their good intentions of defending the interest and wellbeing of the students.