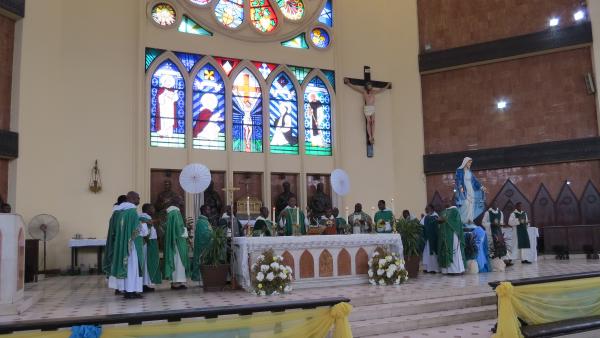 In anticipation of the official commencement of electioneering campaigns preparatory to the 2023 polls, the Catholic Archdiocese of Abuja held its Third General Assembly which had as theme, Witness in Politics: The role of the Catholic faithful. The Assembly attracted delegates comprising the clergy, religious and the laity from all the parishes in the Federal Capital Territory (FCT). The Archbishop, Most Reverend Ignatius Kaigama, his Auxiliary, Bishop Anselm Umoren and the Emeritus Archbishop of Abuja, His Eminence, John Cardinal Onaiyekan were in attendance throughout the three-day event.

The sessions were addressed by speakers drawn from different walks of life, whose papers elicited heated and passionate reactions as is to be expected in such a political gathering.

The environment was perceptively inspiring and the participation a reflection of an earnest desire by the people to attain the level of awareness that can lead to a result good enough to achieve the goal of effective political leadership and the attendant good governance that is the yearning of every Nigerian. The subjects deliberated on were as varied as the background of the speakers.

However, there was a consensus of opinion that the church and politics are not isolated from each other. The church, for one, understands the goal of politics and often always takes the initiative to support credible political processes.

With this in mind, it pledged the willingness to partner with the government at all levels even as this will be done not with a view to seek material benefits but to pursue a divine mandate of witnessing to the world. Similarly, and without compromising its spiritual inclinations, the church made it clear that it will resist any mechanism employed to stifle her role as a voice of the voiceless as such would be considered a disservice to the common good of the populace and humanity.

Restating its commitment to the unity of the country as well as its aversion to the state of insecurity, banditry, unbearable level of unemployment in the country, delegates were unanimous in their position   that despite the many failures of governance, the church still nurtures and will continue to sustain the hope of a democracy that will usher in a renewed era of social justice, equity, peace and prosperity.

Inviting Nigerians to greater political responsibility, the Church affirmed its duty to urge the citizens to be part of decisions on what happens in the society adopting the approach to contemporary social, economic and political issues that are rooted in peculiar Christian identity, being aware of their own specific vocation within the political community and defending distinct points of view by honest methods.

The church used the opportunity provided by the Assembly to voice its reservation over the penchant by politicians to exploit the cleavages that exist along religious, ethnic and class lines to favour their electoral interests. In particular, it expressed its regret that the culture of vote-buying, facilitated by high poverty levels, has been used as a tool not only to win elections but also to perpetuate the poverty cycle.

It is from this perspective that the delegates agreed that it behoves the clergy, religious and laity to encourage one another to counter poverty, ignorance and hopelessness that constitute the incentives to engage in electoral malpractices. They also stressed that every vote sold is a bright future mortgaged.

In the opinion of this newspaper, the position of the church on low voter turnout was, all considered, commendable just as it expressed the concern that such disposition on the part of the electorate is decidedly a setback to political participation even as it emphasised that democracy rests on the bedrock of unfettered participation by the people.

Relying on this understanding, the church was optimistic that the upsurge in the number of registered voters across all the geopolitical zones will translate to better voter turnout. Delegates assumed that Nigerians have experienced the consequences of previous voter apathy and should know better than to perpetuate it.

It is in this light that they appealed to all citizens, irrespective of religious affiliation, to consciously and actively be involved in the electoral processes at all levels. Everyone must ensure that they have their Permanent Voters’ Card (PVC) which will enable them to cast their votes on election days with firm and clear conscience to elect credible leaders who will bring about the true dividends of democracy.

Expectedly, in our view, the church called for an intensification of prayers, particularly among Catholics, so as to have free, credible and transparent elections next year. In this regard, it implored the Independent National Electoral Commission (INEC) to ensure the political fairness and transparency needed to consolidate the trust reposed in them by Nigerians.

As a newspaper, we are enthused by the avowal of the church to remain open and willing to collaborate with relevant governments and their agencies, the electoral body and security operatives to ensure peaceful and credible election processes in the upcoming election cycle.

In our opinion, it is pertinent to point out that there is an urgent need, on the part of all political actors, to refrain from money politics, manipulative and divisive practices. The youths, especially, must refuse to be recruited for political thuggery and other anti-democratic activities devised to enthrone selfish and incompetent aspirants into public offices.  Delegates agreed that the days of lukewarm attitude to politics must be accepted as over. They also agreed to follow up with enlightenment campaigns to educate Catholics, especially, that the time for political action is now.