Justice delayed, according to the popular maxim, is justice denied. ANGELA NKWO-AKPOLU dwells on the fate of litigants and lawyers seeking justice from the National Industrial Court of Nigeria (NICN), Owerri.

by Angela Nkwo- Akpolu
in Feature
0 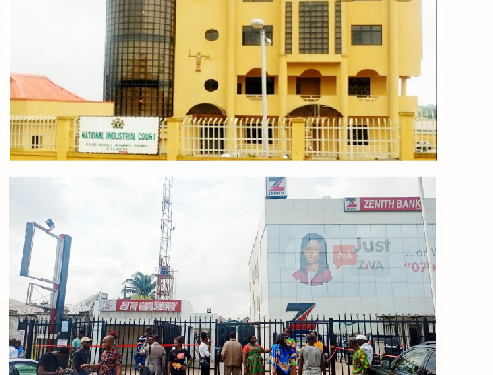 Except something is done fast to placate the fears of the Presiding Judge of the National Industrial Court of Nigeria (NICN), Owerri division, Justice Ibrahim Suleiman Galadima, the fate of litigants and lawyers with cases before him may just spiral into years of endless waiting for delayed justice.

This is because of the panic caused by the aides of the Imo State governor, Senator Hope Uzodimma, who arrested four officials of the NICN while they were effecting a judgment of the court.

The notice in the memo signed by the chief registrar of the court, Olurotimi Williams Daudu, reads in part, “I have been directed by the Hon. president of the National Industrial Court of Nigeria, Hon Justice B B Kanyip, PhD, to inform you that the Owerri Judicial Division of the Court has been closed down till further notice.

“Consequently, all the staff of the judicial division are hereby directed to stay away from work until further notice.”

The four officials manhandled were Mr Chima Emeka Ndukwe, Akoma Jeremiah, Ikedi Amadi and Nze Moses, all senior staff of the National Industrial Court Owerri whisked away to the Anti-kidnapping Unit of the Imo State Police Command while effecting the judgment of the Court involving Zenith Bank Owerri branches.

A former deputy governor of the state, Prince Eze Madumere had secured an absolute garnishee Order from the National Industrial Court in Owerri against the bank in a suit.

A bank staff had told LEADERSHIP  Weekend that “The order was for N1.9bn entitlements claim for Madumere and the policemen from Zone 9 have come to implement the court order. The court ordered that the bank should pay him because the state banks with us. The judge in his judgement barred the defendants from appealing and ordered 24 hours for the implementation of the judgment”.

As a result of that judgment, the three branches of Zenith Bank on bank road,  Douglas and Wetheral were sealed from Thursday, June 2nd to Friday, 3rd.

Apparently, irked by the inability of bank customers to access transactions, officials of the Imo state government allegedly led by the Special Adviser to the Governor on Special Duties, Nze Chinasa Nwaneri accompanied by a team of Police operatives allegedly attacked and abducted the four officials.

The Nigerian Bar Association Owerri branch in her press statement raised an alarm over the disappearance of the said four officials who were later discovered at the Anti-kidnapping unit of the Imo State Police command.

NBA Owerri Secretary, Chinedu Agu, in a press release regretted that “In a manner most brutish and saddening, reminiscent of the Stone Age, the said Mr. Chinasa Nwaneri, armed with the order of the state high court, led a legion of heavily armed policemen and fierce-looking thugs to unseal the bank, and in the process brutalized and arrested the said Court Officials, who while on official duty, stopped by the bank to inquire the reason for the heavy presence of security men and thugs in a Bank sealed by a subsisting Order of their court”.

Further, the statement read “We, therefore, register our collective disaffection with the role played by the State Government, its agents, and the Court, who assumed appellate jurisdiction over a judgment delivered by another court of coordinate jurisdiction, in a manner that ridicules the sacred tenet of court hierarchy, disparages our judicial system, mocks the principles of rule of law and scorns our noble legal profession.”

Speaking to Leadership, Agu maintained that the National Industrial Court Owerri branch was still under lock and key as directed by the President, saying “No, he has not vacated the order yet. You can quote me, I have no problem with that. I am giving you a fact”.

Though the banks have been unsealed, activities are yet to return to normalcy at the National Industrial Court as the place is still under lock and key while lawyers scramble for new hearing dates.

Unfortunately, those bearing the brunt are innocent citizens battling illegal dismissal by employers or the reverse, not forgetting the cost of appearances of lawyers by already stretched litigants.

One of the victims is the two factions of the Nigerian Union of Journalists in the state who are currently at loggerheads over who are the constitutionally elected officials of the union, and several thousands of litigants.

Unfortunately, while litigants worry themselves to death, the state government and concerned authorities appear to be far from an amicable solution.

According to the state Commissioner for Information, Chief Declan Emelumba, the NICN officials were on an illegal assignment. He said in a statement “unfolding facts indicate that the police that sealed the Zenith bank offices in Owerri on Wednesday were on an illegal operation”.

According to Emelumba, “from the emerging facts it was clear that the former Deputy Governor, Eze Madumere was in concert with some opposition politicians  to sabotage the state’s economy and ultimately embarrass Governor Hope Uzodinma who had pledged to pay workers and pensioners promptly at the end of every month.”

Emelumba maintained that the Garnishee order which led to the sealing of branches of Zenith Bank in the state was a calculated attempt to cripple the economy of the State by denying workers their pay for the month of May 2022.

To compound issues, a group, Imo Coalition For Justice, Peace and True Democracy took to the streets of Owerri, to protest against what they called ‘an attempt to corner N1.9 Billion of Imo State funds by the former Governor of Imo State Senator Rochas Okorocha through His former Deputy, Prince Eze Madumere.

The group chanted solidarity songs in support of the state government and walked round the state capital including the official lodge of the judge to protest the judgement of Justice Galadima.

That singular action in front of the official residence sent fear and apprehension into the jurist who probably for fear of his safety has ordered the sealing of the NICN till further notice.

Secretary of the group, Mr. Ahumaraeze Ikechukwu had accused the presiding judge of collusion with the past administration of Rochas Okorocha to swindle the state of the funds public opinion termed outrageous.

He said “With profound humility to your Lordship. We raise that Justice Suleiman Galadima has given a contentious judgement against the state government of Imo State likely to cause grievous, economic sabotage for his personal benefit. We pray my lord to address the issue in the interest of justice.”

Already, condemnation has trailed the action of the state government especially since Governor Hope Uzodimma assumed office through the pronouncement of the Supreme court.

A renowned political commentator, Barr. Kissinger Ikeokwu had this to say, Court officers were whisked away  to unknown destinations. Their crime is that they performed their lawful duties. This is the same man that became governor by virtue of our courts. These same people would criticise Okorocha for not obeying Court orders. But today they are unravelled as the biggest abusers of the rule of law and due process.”

Already NBA Owerri branch had condemned the state government for using a court of coordinate jurisdiction to vacate the order.

Chinedu Agu, the NBA scribe had said “rather than challenge the same judgment in the Court of Appeal, the Imo State Government, obtained a Court Order from a High Court sitting in Owerri (a court of coordinate jurisdiction) restraining Zenith Bank Plc from obeying the judgment of the National Industrial Court, Owerri.

“We, therefore, register our collective disaffection with the role played by the state government, its agents, and the Court, who assumed appellate jurisdiction over a judgment delivered by another court of coordinate jurisdiction, in a manner that ridicules the sacred tenet of court hierarchy, disparages our judicial system, mocks the principles of rule of law and scorns our noble legal profession.”

Meanwhile, the Court of Appeal in Owerri has ordered the unsealing of the bank and adjourned the hearing to June 30th.

Justice Rita Pemu also granted the relief sought by the Imo state government to enable it to file its appeal before the appeal court against a judgement of the National Industrial Court in Owerri ordering the state government to pay N1.9billion to a former deputy governor of the state, Eze Madumere, being his benefits while in office.

The two reliefs granted were: a stay of execution on the unsealing of Zenith Bank branches in Owerri and the right for the Imo state government to appeal the absolute garnishee Order in favour of Madumere.

Like the proverbial saying “when two elephants fight, the grass suffers” may be playing out, as wrongly dismissed staff wait endlessly for another cycle of dates to avenge their maltreatment.

2022 WAFCON: Our Primary Aim Is To Qualify For The World Cup – Oshoala