by Jonathan Nda-Isaiah and Sunday Isuwa
in Cover Stories, News
0 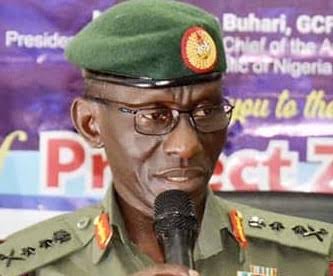 Civil Society Organisations (CSOs) in the country have kicked against the plan by the federal government to commence local production of arms, alleging that it is a ploy to siphon money.

The CSOs wondered why the same government that had abandoned Defence Industries Corporation of Nigeria (DICON) for the past seven years has suddenly woken up less than a year it is wining down.

They stated this following Vice President Yemi Osinbajo’s declaration that  Nigeria’s current security challenges and emerging threats require the country’s military and other relevant stakeholders to be several steps ahead of perpetrators while also stepping up local production of armaments.

The VP who spoke late Wednesday after receiving a presentation on “Defence Transformation and National Security: Strategic Options for Nigeria of the Future” by the National Defence College Course 30 participants during a virtual interaction made a case for improved investment in Defence Industries Corporation (DICON).

DICON, the state-run defense corporation of Nigeria, is operated by the Nigerian Armed Forces.

Established in 1964, DICON which is responsible for the production of defense equipment and civilian products has suffered from poor funding and neglect over the years.

The CSOs who spoke with our correspodent are Transparency International (TI), the Civil Society Legislative Advocacy Centre (CISLAC) and Transition Monitoring Group (TMG).

Speaking through their leader, Awwal Musa Rafsanjani, the CSOs said with the rising insecurity, Nigerians are discouraged with every action of the government, adding that the planned local production of arms should be put on hold till the next government takes over.

Rafsanjani said, “Well, the government has no focus and has no direction, otherwise Nigeria has invested a lot of money in arms manufacturing.

“The Kaduna arms equipment manufacturing was killed and for the seven years that the government came, they have failed to revitalise the arms manufacturing company.

“The government has no focus and somebody now wants to use it to get money and for you to begin to revitalise and make the arms industry productive, it will take some years.

“We don’t want people in government to take funds in the name of producing local arms because the arms will not be ready and money may just be taken without accountability.”

Establishing the basis for their opposition to local production of arms, the CSOs said the government has no grant or budgetary provisions because it had no intention of producing arms locally.

Rafsanjani stated: “The government has not made any budgetary allocation and it is not part of its agenda. We think they should have planned in paper and leave it to the next government to execute because we don’t want anyone to steal money in the name of producing local arms by people who are desperately looking for money.”

“This government must minimise reckless spending and opportunity for looting and diversion of public funds in the name of producing arms.

Meanwhile, Vice President Osinbajo had made a case for improved investment in Defence Industries Corporation (DICON), noting that “every country of the world takes advantage (in my view) of the crisis situation that it faces.”

A statement by his media aide, Laolu Akande, quoted Vice President Osinbajo as saying: “You look at the challenges that we are facing and the nature of those challenges, it is evident that we need to be many steps ahead of non-state actors in particular who are perpetrators of this asymmetric warfare that we are experiencing.

“It is clear that given current realities in our security situation, there is absolutely every need for us to fast-forward all our plans for the future so that we can be much more effective in dealing with the current threats and the threats that we will experience as we go into the future.

“One of the most critical areas is the question of local production of military hardware and I think it is a low-hanging fruit when it comes to manufacturing some of the hardware that we will need. I think that there is a need, especially now to really look very closely at local production of our hardware, beginning with armament.

“We mentioned India, Brazil, and even the more developed economies of the world, during the first world war, the second world war, it was these challenges that led to the development of their military-industrial complexes. We have a challenge today, there are so many zones where there are conflicts. Our law enforcement is spread out everywhere.”

Commending the course participants for their efforts in proposing innovations in the defence sector, Osinbajo emphasised the urgency of the local production of arms.

He said, “If we say the local companies should produce some of the mobile platforms like Armoured Personnel Carriers (APCs) and Multi-Role Armoured Vehicle (MRAV), if we give them the contracts, they will produce, but if we choose to import rather than produce locally then we will never develop our military-industrial complex.”

The vice president also stressed the need for transparency in the management of resources meant for the acquisition of hardware for the defence and security agencies.

He said, “There needs to be more accountability because every time you hear about ‘we not having enough equipment,’ but there must be accountability. I will like to see a framework for greater accountability within the Ministry of Defence that ensures that they are able to account for military expenditure”.

Earlier in a presentation on behalf of the Course 30 participants, Col. A. A. Adamu proposed, among other things, the restructuring of the ministry of Defence to reflect contemporary challenges as well as contain emerging threats to defence and security.

Adamu, on behalf of the course participants and the management of the National Defence College, prayed for the speedy recovery of the vice president who is still recuperating, while thanking him for the opportunity to make the presentation.

Also present at the event are chief of staff to the president, Prof Ibrahim Gambari; Chief of Naval Staff, Vice Admiral Awwal Gambo; the Commandant of the National Defence College, Rear Admiral Murtala Bashir, and representative of the Inspector General of Police, among other senior officers from the college.

Research report presentation by course participants to the vice president is a prominent feature in the annual academic calendar of the National Defence College.

Every year since 2016, participants of the college have presented reports of research conducted in key areas to the Vice President.