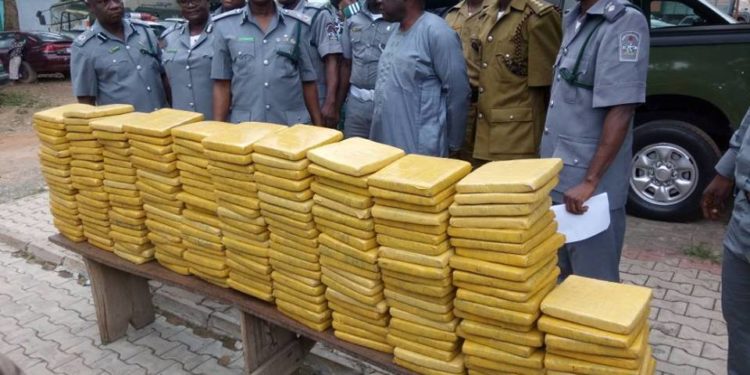 The Western Marine Command of the Nigeria Customs Service (NCS) has said it intercepted trucks of foreign parboiled rice, as well as, sacks of Indian hemp smuggled from neighboring Benin Republic into Nigeria through the high sea.

Speaking to newsmen, the Customs Area Controller (CAC), Compt. Abubakar Umar, he said the contrabands which were seized between February and May 2022 worth N197 million.

According to him, while the hemp worth N168 million and was seized on the 30th of March, 2022 after credible intelligence, other smuggled items such as rice, kegs of Premium Motor Spirit (PMS), also known as, petrol; 71 bales  of second hand clothing among others which were seized at Idiroko, Seme, Badagry and Bar-beach worth N29.6 million.

Compt. Umar said, “On Wednesday, 30th of March, 2022, at about 0330hours, the operatives of the command acting on credible intelligence, accosted and intercepted a wooden boat at Oko-Ajah beach containing sacks suspected to be Cannabis Sativa. The goods were brought to the Western Marine Command of the NCS, and upon physical examination, found to contain 32 sacks of 2,520 pieces of Cannabis Sativa weighing 1,437kg with a street value of N168m.

He stated further, “On Thursday 7 April 2022 at about 1930hrs, our operatives while on credible intelligence along Badagry waterways intercepted and seized One wooden boat laden with foreign parboiled rice suspected to be smuggled from Benin Republic.

foreign rice and its means of conveyance were brought to the Command for examination and on physical examination it was found to be 503 Bags of foreign parboiled rice.”

“In a related development, on Wednesday 25 May 2022, at about 1900hrs, the operatives of the Command intercepted and arrested another two wooden boats laden with foreign parboiled rice at Oniru Beach. The boats and the smuggled foreign rice were counted and found to be 136 Bags of foreign parboiled rice.”

According to the Customs boss, the seized indian hemp will be handed over to the National Drugs Law Enforcement Agency (NDLEA), inline with inter-agency collaboration.

“For the period under review, the operative of the Command arrested and seized total of 828 Bags of foreign rice suspected to be smuggled from Benin Republic with Duty Paid Value (DPV) of N29.6million. Similarly, the operatives of the command at different locations in Idiroko, Badagry, Bar-Beach and Sea side intercepted different smuggled items.

“The total Duty Paid Value of the seizures is N197million and due to the nature of the PMS, the Command on the approval of headquarters auctioned the product and the amount generated has been remitted into the Federation account.

“With the approval of the CGC, the seized Cannabis Sativa will be handed over today to the Commander, Marine Unit of the NDLEA, as part of the existing inter-agency collaboration between the two organisations.”