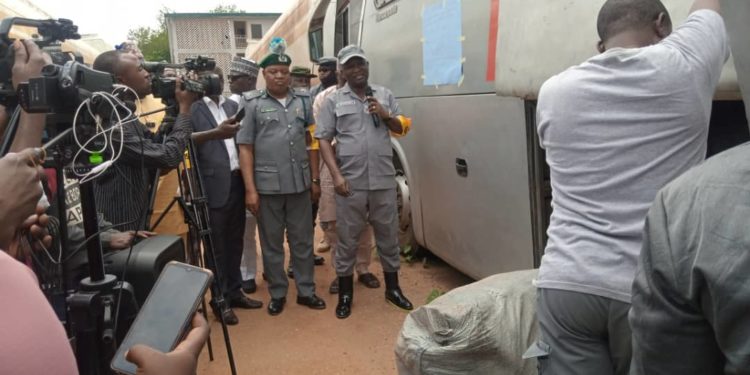 The coordinator of the JBPT in the North-Central, Comptroller Olugboyega Peters, disclosed this during a news conference at the Customs House in Ilorin, Kwara State on Wednesday.

Peters said that the operatives of the JBPT also tracked and arrested a trailer with Reg. No SRP 501 XA 550 conveying foreign parboiled rice of 50kg each, along Mokwa-Jebba Road with a duty paid Value (DPV) of N14,025,000

“Prominent to note also was the interception of 2019 Lexus Jeep that cost N21,000,000.00) intercepted around Benue axis of the sector. It beats my imagination to think that a man who can afford this type of luxury car can evade customs duty of N7.3million,” he added.

The comptroller added that the reinvigorated operatives of the sector, had at different times and locations intercepted and seized 3068 kegs of 25 litres each of petroleum totaling 76,700 liters during attempts by some unpatriotic Nigerians to smuggle them out of the country.

“It is difficult to imagine that despite the current scarcity of Petroleum Motor Spirit (PMS) in the country, some unpatriotic Nigerians still attempted to smuggle this product out of the country through our border.

“However, in line with the extant laws, most of the inflammable products have been auctioned to the public and with the amount generated as fees remitted to government coffers.

“Worthy of note is the fact that petrol smuggling through the sector has continued to be on the decrease in the face of sustained offensive against the illicit trade because the profit motive that drives smuggling is being scuttled. It is therefore reasonable for such people to embrace other means of livelihood,” Peters added.

He said they would not relent in their efforts at fighting smuggling to a standstill, adding that, “We are on daily basis improving on our intelligence gathering method and deploying our efforts, as well as available logistics in accordance with all extant laws as enshrined in the Customs and Excise Management Act (CEMA) Cap C45, LFN 2004 as amended, to ensure that Sector 3 is uncomfortable for all economic saboteurs.

“We therefore use this opportunity to warn those with evil activities and those using official or company vehicles to smuggle goods into the country to steer clear of sector 3 axis as there shall be no safe haven for them.

“Within the period under review, the sector has made One Hundred and Seven (107) interceptions which include Premium Motor Spirit (PMS), foreign parboiled rice, motorcycle, cartons of foreign tomatoes and secondhand (worn) clothing with a duty paid value (DPV) of N139,707,500.”

7 Incredible Health Benefits Of Strawberries And Why You Should Eat More... Click Here For Details
Tags: Customs
SendShareTweetShare
Previous Post