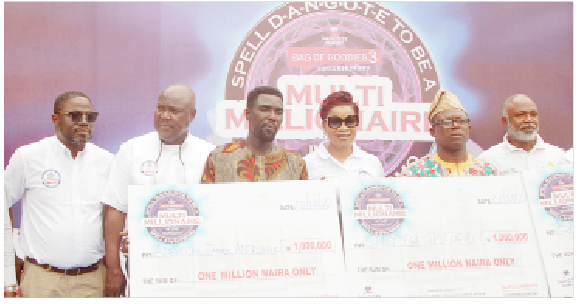 The promo has produced the first set of millionaires in Ibadan, Oyo State. No fewer than three lucky Dangote Cement consumers were presented with one-million-naira cheques each even as many others won various prizes including television sets, refrigerators, rechargeable fans, 2KVA generators, and millions of airtime gifts.

The leading Cement manufacturer had weeks ago unveiled a Bag of Goodies National Consumer promo, Season 3 in Lagos during which the Company announced that 500 consumers would win a million naira each while another 100 would win N5million Naira within three months.

Amidst praises on the management of the Cement Company, the winners who are block moulders in Ibadan described their winnings a very surprising as they never believed the promo was real pointing out that crediting of their accounts was timely given the prevailing economic downturn that has impacted negatively on their business.

National Sales director, Dangote Cement, Mrs. Funmi Sanni explained that the promo was deliberately planned for this period to help the Dangote Cement customers and consumers because of the hard times brought upon businesses by the Covid-19 disruptions.

According to her, about N1 billion would be given as prizes by Dangote Cement in form of cash as well as home appliances, saying the promo was indeed a bag of goodies for the Cement customers across the federation.

While congratulating the winners in Ibadan, Sanni said the promo was aimed at giving back to consumers who have been the company’s pillar of support and to encourage them for more patronage, saying “we create value through quality products, exceptional service, competitive pricing and unparalleled consumer value proposition”

This, she noted, was in demonstration of the Company’s vision which is to provide for the welfare of its stakeholders among which she stated the consumers of the Dangote Cement product were a very strategic and important members.

According to her, the promo started 5th of July, we say thank you and we will continue to appreciate Nigerians for their patronage and loyalty, we want to urge them to continue to do business with us whenever the need for cement arises.”

The National Sales director said, “we produce quality products for any types of cement application, we are the leaders in cement industry, we lead the way and others to follow. The Dangote Bag of Goodies spell and win promo will give an equal chance to everyone, even those at the grassroots level, to become millionaires.”

In his own remark, Dangote Cement Regional Sales director, Mr. Tunde Mabogunje said the Season 3 promo is to further take Dangote Cement customers to another level of prosperity as the promo will produce 125 millionaires monthly as over a N1 billion is up for grabs.

He assured the customers of the Company in the South West that they are in for good deal with Dangote Cement as we are determined to empower our customers financially in appreciation of their patronage and loyalty to the Dangote Cement brand.

Also speaking at the ceremony, the West Zonal director, National Lottery Regulatory Commission (NLRC), Mr. Fasunwomi Omotayo said the commission has gone through every details of the promotion and certified it good for the cement consumers and that his presence was to lend credent to the fact that the promotion is genuine.

He commended the management of the Dangote Cement for the transparent manner it was conducting the promotion, saying that Dangote cement was one of the leading indigenous companies in Nigeria that reached out to its consumers, noting that this is not the first time of doing such.

“As a regulatory body, we are into it together for the sake of accountability, professionalism and equity. Dangote has raised many millionaires and they are still raising it, the lottery is pure and transparent,” he submitted.

The beneficiaries, who won N1 million each expressed their gratitude to Dangote Group for the cash prize.

It would be recalled that Dangote Cement had unveiled in Lagos its National Consumer Promotion tagged “The Bag of Goodies spell and win Season 3” with fanfare.

The management said it was designed by to empower Nigerians. The promo, it explained has run for two years consecutively and that this year’s edition of ‘Bag of Goodies’, is set to produce 125 millionaires monthly.

The company’s in its half year ended June 30, 2020 revealed that it is ramping up production in its Okpella plant, Nigeria and progressing well to deploy grinding plants in Ghana and Cote d’Ivoire, in ensuring Cement becomes available in all African countries.

The chief executive officer of Dangote Cement, Michel Puchercos, said “despite the elevated inflation due to a very volatile global environment, the first half of 2022 has been positive. We recorded increases in revenue and EBITDA that drove strong cash generation across the Group. We recorded revenue of N808.0 billion up 17 percent compared to last year and Group EBITDA of N373.2 billion, up 6.3 percent with an EBITDA margin of 46.2 percent.”

Puchercos explained that significant increase in energy and AGO costs are impacting negatively on production and supply of cement products. He added, “to drive consumer engagement and support demand ahead of the rainy season; we have commenced the third season of our national consumer promotion; ‘Bag of Goodies 3’. On the operational side, we are ramping up production at our Okpella plant and are progressing well to deploy grinding plants in Ghana and Cote d’Ivoire.”

“Our continuous focus on efficiency, meeting market demand and maintaining our costs leadership drives our ability to consistently deliver superior profitability and value to all shareholders,” he added.

Dangote Cement is Africa’s leading cement producer with nearly 51.6Mta capacity across Africa. A fully integrated quarry-to-customer producer, it has a production capacity of 35.25Mta in its home market, Nigeria. Obajana plant in Kogi state, Nigeria, is the largest in Africa with 16.25Mta of capacity across five lines while Ibese plant in Ogun State has four cement lines with a combined installed capacity of 12Mta. The Gboko plant in Benue state has 4Mta while Okpella plant in Edo state has 3Mta. Through recent investments, Dangote Cement has eliminated Nigeria’s dependence on imported cement and has transformed the nation into an exporter of cement serving neighbouring countries.