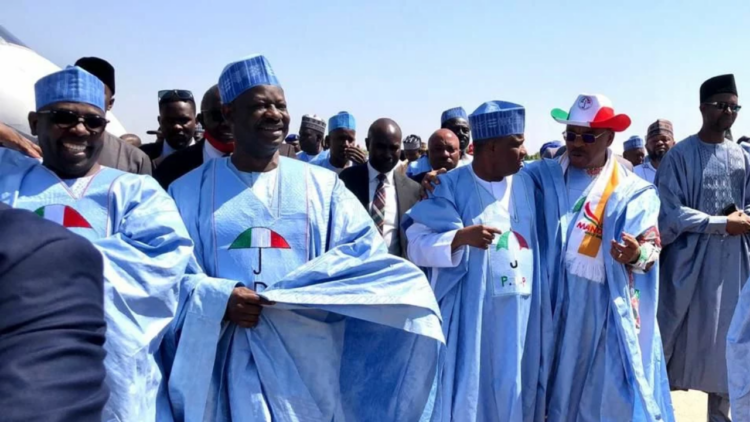 Wike alongside other four sitting governors otherwise called ‘ G-5 governors’ have declined to join Atiku’s campaign council since his victory at the last PDP presidential primaries held in Abuja.

However, as Wike and his allies are yet to sheath their swords, his former campaign DG, Dankwambo joined the campaign rally of Atiku which was held at Pantami Stadium, Gombe, Gombe State.

Our correspondent reports that there were cheers from the crowd as Dankwambo’s presence was announced at the venue of the rally.

Although the former governor did not speak much while at the podium, he described Atiku as future president of Nigeria. This is even as he donated 20 buses for Atiku’s campaign in the state.

Also in his speech, the Director General of Atiku campaign council and governor of Sokoto State Aminu Tambuwal said Gombe is the home base of Atiku Abubakar.

He assured that Atiku’s administration will work towards the recovery of Nigeria’s economy through revitalization of commerce and agriculture.

The chairman, campaign council of PDP, Udom Emmanuel, claimed that their candidate is the most competent candidate who has the solution to the nation’s problems and the capacity to turn things around for the better in the country.

He lamented the hike in the prices of foodstuffs and essential commodities under the APC led federal government promising that the PDP will change the scenario.

The PDP national chairman Iyorcha Ayu said abolition of hunger and insecurity will be the priority of their administration.