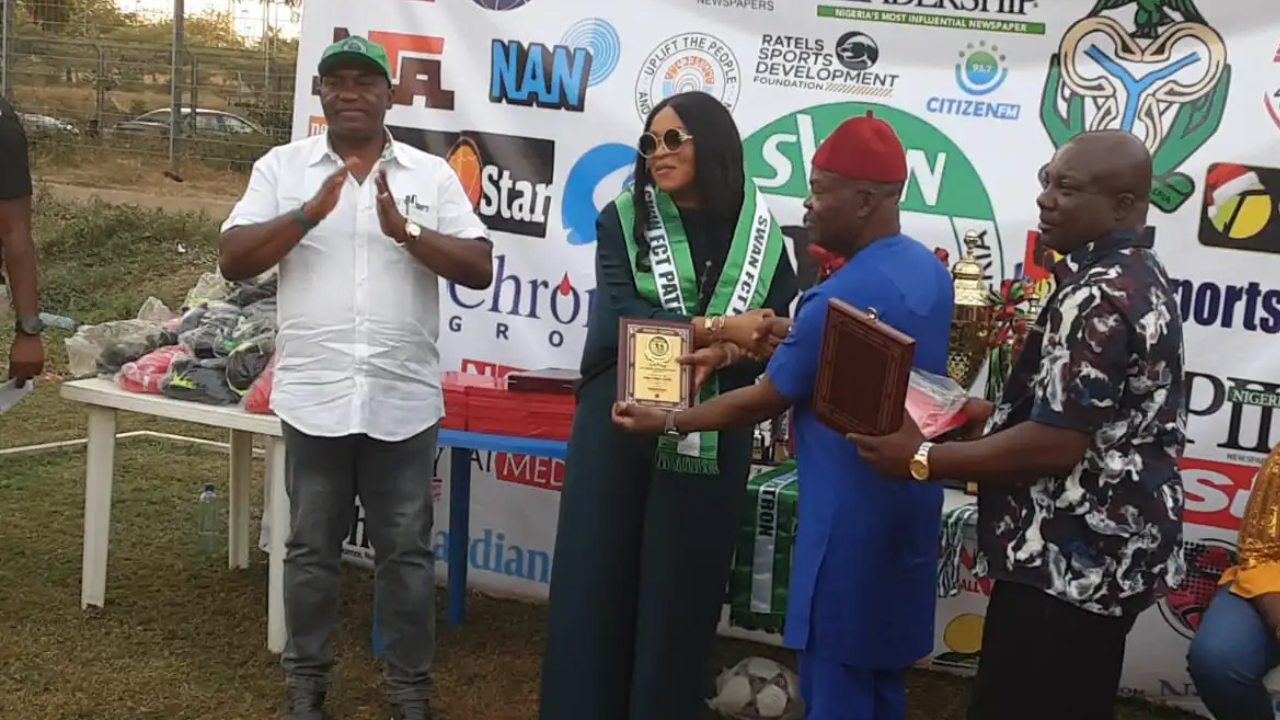 Sporting media professionals under the aegis of Sports Writers Association of Nigeria (SWAN) FCT on Thursday November 24, 2022 rolled out drums to celebrate outstanding personalities within the nation’s capital and the country.

Top among those who deserved honour and was dully crowned SWAN Patron is Sir Emeka Offor, Chairman Chrome Group.

The business mogul and well-known philanthropist whose wife Barr. Adaobi Emeka Offor stood in for, in company of AIG Chris Ezike (Rtd), Chief of Staff to Sir Emeka Offor and management staff at the auspicious event, held inside the prestigious Moshood Abiola National stadium Abuja received plaudits by many stakeholders who described him as a unique man who goes about doing good in all facets of the society

Only recently, the Anambra state-born philanthropic giant under one of his towering establishments – Sir Emeka Offor Foundation reached out to floods victims in Nigeria with cash and relief materials worth millions of naira.

Before then, Sir Offor has been rolling out numerous humanitarian gestures including taking care of the indigent people through regular and robust educational scholarships, free healthcare services and other empowerment programmes.

“As sports Journalists, we have had an existing relationship for the past few years with Sir Emeka Offor Foundation. However, the impact or result of this interface with this short time looks as if is decades of years.

“Indeed, we are very delighted with what Sir Emeka Offor who is now our Patron is doing in every aspect of Nigerian society including in Sports,” Chairman of SWAN FCT, Mr. Ndubueze Chidoka said.

Still going down memory lane, Mr. Chidoka recalled how he approached Sir Emeka Offor about five years ago during a para-sporting event which he fully sponsored in Abuja, and “without any much hassle and protocol which we are use to when seeking for sponsorship or support, Sir Emeka Offor granted us audience, and before you know it, he welcomed us wholeheartedly.

“His kind of personality is rare in Nigeria. And that is more reason why we didn’t ponder so much in conferring him as our Patron.”

Responding shortly after, the elated Sir Offor expressed satisfaction with the laudable membership welfare approach SWAN FCT has been known for in recent times and assured of continuous and increased partnership with the media.

He also promised to host champions of the 2022 SWAN week competitions as well as SWAN FCT leadership on a soon to be announced date and venue.

The Foundation had in 2019 given the professional association its first trophy and cash which was later retired after the Nigeria Television Authority (NTA) won the trophy a record three times.

Incidentally, NTA at the end of this year’s competition won the new trophy after defeating News Agency of Nigeria (NAN) on penalties.

During an evening of honour and prize given ceremony, each member of the winning teams received medals just as the overall winners, second and third best sides smiled home with trophies and cash prizes.