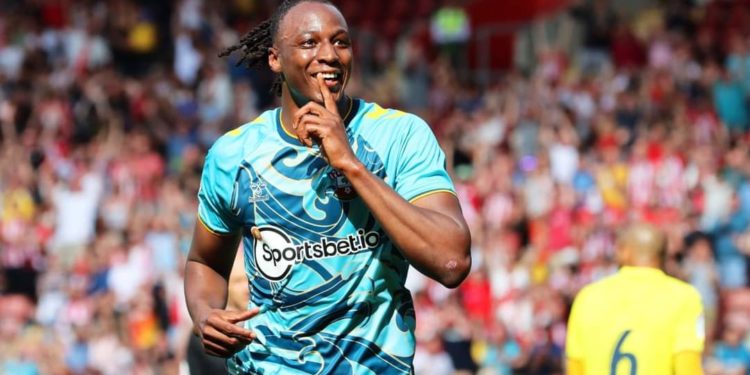 Joe Aribo opened his Premier League goals account as he inspired Southampton to come from 2-0 down to draw 2-2 against visiting Leeds on Saturday.

Aribo, who came on in the 61st minute, pulled a goal back for Southampton after 11 minutes after his introduction.

The former Rangers star got onto Adam Armstrong’s low ball at the back post to get the Saints back into the game after a brace from Rodrigo had put Leeds 2-0 up.

And with nine minutes left Kyle Walker-Peters completed the comeback to record Southampton’s first point of the season.

After losing 4-1 to Tottenham Hotspur in their first game of the new campaign, Southampton now move up to 15th position in the league table.

At the Emirates, Kelechi Iheanacho had an assist but Leicester went down 4-2 to Arsenal. Wilfred Ndidi was in action for the Foxes.

Iheanacho replaced Jamie Vardy in the 70th minute and set up James Maddison whose low shot went through the legs of Aaron Ramsdale to make it 3-2.

Arsenal’s new signing Gabriel Jesus bagged a brace on his home debut, with Granit Xhaka and Gabriel Martinelli also getting on the score sheet.

The defeat leaves Leicester in 14th place while Arsenal are second after securing two wins out of two games played.

And in other results champions Manchester City thrashed Bournemouth 4-0 to stay top on the log, Newcastle held Brighton to a goalless draw while Wolves and Fulham also settled for a 0-0 draw. Football Body  Appoints Ex- Governor Igbinedion As National Patron

2023: We Will Be Open To Engagement, Not Propaganda – APC

2023: We Will Be Open To Engagement, Not Propaganda - APC