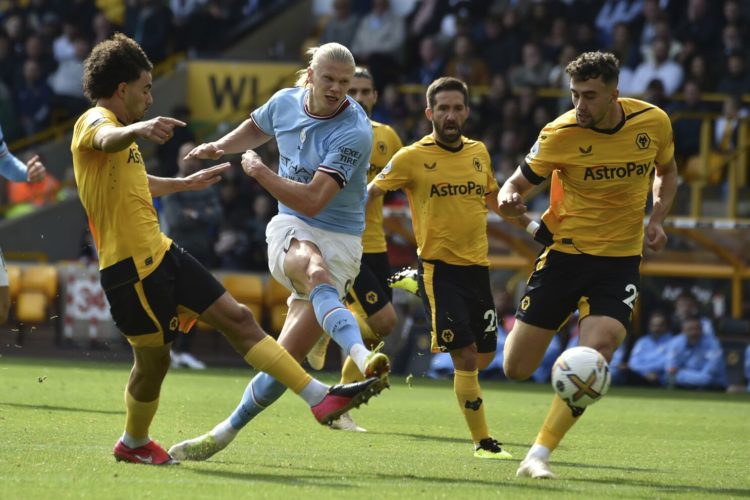 Erling Haaland continued his impressive scoring form as he got on the score sheet again, in Manchester City’s 3-0 win away to 10-man Wolverhampton Wanderers in Saturday’s Premier League early kickoff.

Haaland has now become the first player in Premier League history to score in each of his first four away games in the competition.

The Norwegian striker has taken his tally to 11 goals in seven English top flight games.

Also on target for City were Jack Grealish and Phil Foden.

In the first half, Wolves were reduced to 10 men after Nathan Collins was sent off for a dangerous foul on Grealish.

Wolves new signing Diego Costa, was not included in the match day squad.

The win means City, now on 17 points, temporarily go above Arsenal to first place in the league table.

City got off to a perfect start as Grealish marked his 100th Premier League appearance by breaking the deadlock in the first minute, turning in Kevin De Bruyne’s cross.

Haaland made it 2-0 in the 16th minute dribbling at Max Kilman and then finding the bottom-left corner.

Things went from bad to worse for the home team when Collins saw red for a high dangerous challenge on Grealish.

And in the 69th minute Foden turned in De Bruyne’s low cross at the near post to give City a 3-0 lead.