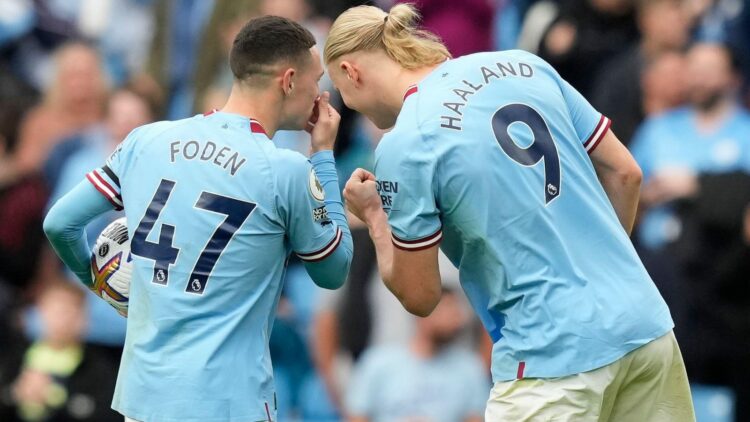 After wins over Liverpool and Arsenal this season, Man United fans will have turned up at the Etihad Stadium on Sunday believing they could get a positive result against Man City but any hope was gone after just eight minutes.

Pep Guardiola’s side were already dominant before Phil Foden scored the first goal and United were lucky to be only 4-0 down at half-time after City had managed 15 shots on goal.

United have shown signs of improvement under Erik ten Hag following early season defeats to Brighton and Brentford — particularly against Liverpool and Arsenal — but this was a brutal reality check.

Ten Hag picked the strongest team available to him while Guardiola had to deal with the loss of first-choice midfielder Rodri because of a calf injury and fielded a centre-back pairing of Nathan Ake and Manuel Akanji, but City were still far too strong and won an eighth straight home league game scored while scoring at least three goals to match a run last recorded by Tottenham in 1965.

Guardiola’s team showed again that they are the best in the Premier League by a distance and reminded Ten Hag and United that it will be a while yet before they are realistically ready to challenge for the title. It was a day when City put their derby rivals back in their box.

If there was one remaining question about Erling Haaland in the Premier League it was whether he could do it in the big games and against United, the Norwegian answered emphatically.

Haaland missed the chance to open his account for Man City against Liverpool in the Community Shield back in August but in his first league game against a traditional top six rival, he took the opportunity to silence any lingering doubters with a third hat-trick in his last three home league games.

If the 22-year-old had continued to bang in hat-tricks against the likes of Nottingham Forest and Crystal Palace, he would have been very quickly labelled as a flat-track bully but here he got the better of a centre-back pairing of Lisandro Martinez and Raphael Varane who had been lauded since coming together for the win over Liverpool more than a month ago.

Haaland has now scored 17 goals in just 11 games for City since his summer move from Borussia Dortmund, finding the net in each of his last eight club appearances.

World Cup 2022: Eto’o Gets Physical Outside Stadium In Qatar