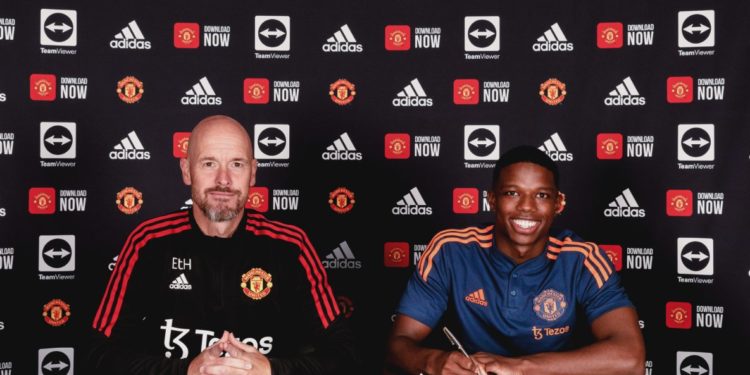 Manchester United have acquired the services of Dutch left-back Tyrell Malacia Feyenoord on a four-year contract with an option for an additional year for a fee of €17m including add-ons.

The 22-year-old becomes the first signing of the Erik Ten Hag era following his appointment as manager in May.

Malacia looked set to join Lyon before United hijacked the deal at the last hour.

Lyon had been in talks with Feyenoord for Malacia and had negotiated a fee of €13million up front, plus €2million of add-ons.

The French side had hoped to conclude the deal last Tuesday, however that offer was trumped by United’s bid of an initial €15 million that could rise to €17 million.

The Netherlands international commenting on the transfer, said: “It’s an incredible feeling to have joined Manchester United. This is a new chapter for me, a new league with new team-mates and a tremendous manager (Erik ten Hag) leading us.

“I know from playing against his teams in the Eredivisie, the qualities that he has and what he demands of his players.

“Whilst I know that I am still young and will continue to develop, I can promise the United fans that I will leave everything on the pitch every time I pull on the red shirt. I’ll always be thankful to Feyenoord for all they have given to me and my family.

“None of this would be possible if it wasn’t for them. Now I’m ready to focus on the future with United, and help my new club achieve success.”

Malacia made 50 appearances in all competitions last term as he helped guide his team to the UEFA Conference League final in May.

He made his debut for the Dutch national team last September and has won five caps for his national side.

The English club is now trying to reach an agreement with Ajax to sign Lisandro Martinez and it is believed they have established themselves as favorites for the Argentine amid competition from Arsenal.

Malacia will be one of many other options that United have for the position of left-back others include; Luke Saw, Brandon Williams, and Alex Telles.