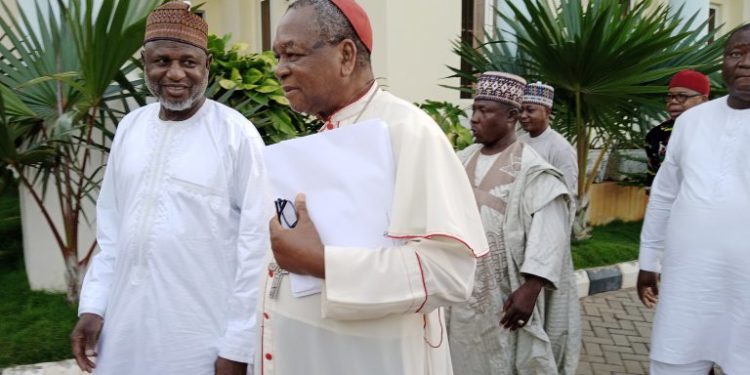 As part of his wider consultation to groups and religious organisations, a presidential aspirant under the platform of the All Progressives Congress (APC) and former governor of Zamfara State, Senator Ahmad Sani Yarima, has said the creation of ministry of inter-religious affairs will help foster inter-religious peace in Nigeria.

The presidential hopeful made this known when he paid a courtesy visit to Cardinal – priest of San Saturino and President, Cardinal Onaiyekan Cofp Foundation for Peace, His Eminence John Cardinal O. Onaiyekan, in Abuja.

Yarima used the visit to appreciate Cardinal Onaiyekan for his prayers and peace building missions in Nigeria.

Senator Yerima also assured the clergy that though he was on a mission to rescue Nigeria but he remains a loyal member of the ruling APC and will support any candidate the party chooses if he was never opportuned to get the party’s presidential ticket.

“I am here to inform you, your Eminence that I am part of those aspiring to lead this country and to seek for your prayers and support because prayer in our various religious organisations especially from people like you is one area God can direct Nigerians towards good leadership and this is the second time I am visiting you but today is to seek for your prayers and by his grace I will still come back for the third time for more prayers and blessings.

“The Inter–religious Council that Onayeikan and Sultan of Sokoto are chairing is doing a great job, I believe we need more than that, we need ministry that will take charge of Christians and Muslims matters, and also look after your guidelines, so that there will be Inter-religious peace in this country and that is part of our agenda by God’s grace come 2023,” Yarima added.

Responding, His Eminence John Cardinal Onaiyekan said humans will always try their best but only God knows the future.

Onaiyekan said, “We who are ordained ministers are assigned a role which the prophets had in our old testaments, because prophets in the old are not kings, but the kingdom of Israel which is led by God will not work if the kings did not listen to the prophets and you have taken the right step by remembering people like us to seek for our support and prayers, I will keep praying for you and to seek for God’s interventions in your movement.”

He, therefore, called on other political leaders and those aspiring for public office to emulate such move by allowing God to take charge in most of their dealings so as to lead the nation aright and get the blessings of God.

Senator Yarima was accompanied during the visit by members of his Campaign Council.

Ondo Killing: Nigeria Will Never Give In To Wicked, Evil People – Buhari