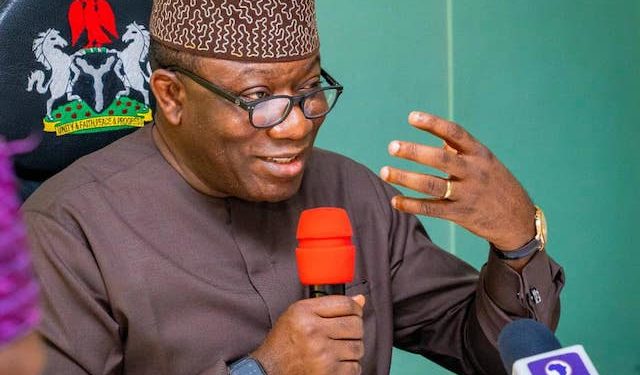 He stressed that no evidence has confirmed that terrorists were responsible for the attack which claimed many lives and left several others injured.

“I am not going to go into any speculation,” the governor said on Monday in response to a question regarding the claim by the Federal Government during an interview on Channels Television’s breakfast show, ‘Sunrise Daily’.

“As far as I’m concerned, the statement that ISWAP or Boko Haram or whatever other institutions are responsible for this (attack) is purely speculative at this stage. I haven’t seen any evidence that concretely puts this in the corner of any of these rogue elements that we have.

“And really it doesn’t – at this stage – matter, they have committed this crime, they have demonstrated the capacity to cause maximum damage to our people,” Fayemi said.

At least 40 people were killed and many injured when gunmen opened fire on worshippers at St. Francis Catholic Church in Owo, the headquarters of Owo local government area of Ondo State penultimate Sunday.

The incident sparked widespread condemnation with various individuals and groups calling on the government to ensure the assailants were arrested and brought to justice.

Amid controversy over who was responsible for the incident, the Federal Government linked the killings to ISWAP terrorists.

Fayemi, who doubles as chairman of the Nigeria Governors’ Forum (NGF), believed the position of the Federal Government was speculation.

According to him, governors, as the chief security officers of their states, are privy to all manners of intelligence but not all of them are actionable.

He explained that they have a responsibility to pass such intelligence to the relevant institutions who are expected to take necessary actions.

“I don’t want us to jump the gun as far as this is concerned and that is why I am not going to go into any detail as to what intelligence we had and at what point we had it.

“Our duty as security officers is to ensure that this does not occur again and we go after elements of this nature, whichever organisation they may represent within our domains,” he stated.