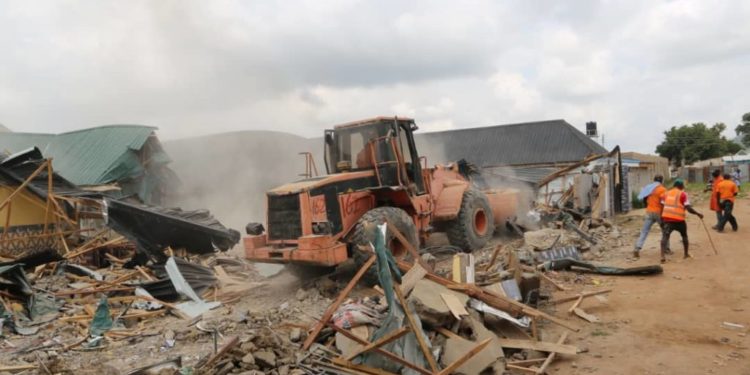 The FCTA officials in the company of well-armed joint security task team stormed the council on Monday to commence the weeklong demolition exercise by first clearing illegal structures along major roads in Kuje town and commencing demolition of major structures on the railway corridor, yesterday.

Senior special assistant on monitoring, inspection, and enforcement to FCT minister, Comrade Ikharo Attah said the demolition along the Kuje railway corridors would be sustained for days until the illegally acquired lands were reclaimed.

He restated that FCT minister, will not relent until the railway corridors were reclaimed. He said, “The Kuje railway corridors cleanup is one of the touchy exercises we are carrying out. It is quite a pathetic situation because when the team from the Department of Development Control came to mark these buildings, they never believed them.

“Our officers are badly touched doing this demolition, some were almost shading tears, that people who really ought to know about the demolition and pack out from their illegal structures did not pack out.

“They refused to pack out because the sellers of the illegal plots of land gave them hope that the government was not serious and will not come to demolish their buildings, but the minister has proved them wrong.”

Some of the residents who witnessed the demolition exercise stated that many of the buyers were warned to stay away from the land, but ignored the warning. One of the residents, Lukman Abduralman disclosed that he was equally wooed by the sellers to buy land there, but refused to take such a risk.

Abdurahman said, “They know that this is government land because they were told by those who know. I have been here since 2015.

“They even told me to come and buy a portion for N200, 000, but I  refused to buy. The buyers said they are aware that the place is temporary and that anytime that government comes, they will leave.”

7 Incredible Health Benefits Of Strawberries And Why You Should Eat More... Click Here For Details
Tags: FCTA
SendShareTweetShare
Previous Post