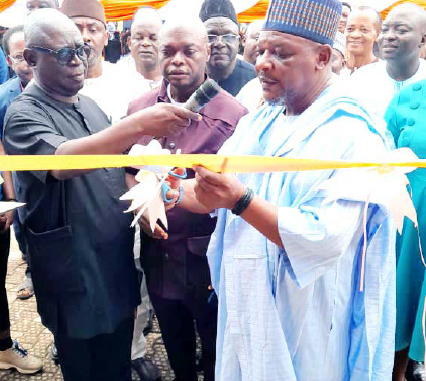 Minister of State for Power, Goddy Jedy Agba (OFR) who commissioned the projects on behalf of Buhari said that the project would help in boosting educational development in the state.

“The projects being Commissioned here today in your Institution, if put to good use, would help to propagate effective learning in the college”.

Welcoming the Minister and other top government functionaries to the College, Provost of the College, Dr. Richard Ugbaha Utubaku lauded the  President and TETFund for giving a listening ear to  yearnings and plights of the students and  the college community by providing a comfortable and serene environment for learning.

The Provost pleaded for more projects to be brought to the College by TETFUND so as to encourage learning in the campus.

In his remarks, TETFUND executive secretary, Architect Sonny Echono who was represented at the ceremony by director, monitoring and evaluation, Arc. Babatunde Olajide expressed satisfaction on the quality of work being done on the projects at FCE Obudu and assured the Provost stressing that more projects will be channeled into the institution to achieve the standard they all require.

Also speaking Cross River State Governor Prof. Ben Ayade who is being represented by the state Commissioner for Education, Dr Godwin Amanke, thanked TETFUND for the numerous intervention projects which had been executed across the various state owned tertiary institutions in the state.

Also in his welcome remarks, Chairman Obudu Local Govt Area, Hon. Boniface Eraye Ewhe, pleaded with the Minister to relay to Mr. President on the state of the deplorable roads in the college, stressing that, a very good road network and landscape will add value  to the excellent infrastructure within the college.

In a related development, Echono has applauded the Nigerian Institute of Advanced Legal Studies (NIALS) for the remarkable service and commitment to excellence in the Nation’s affairs over the years.

Echono expressed the view when he played host to a delegation from the NIALS who paid a courtesy visit to the Fund recently.

The Executive Secretary intimated the delegation of his relationship with the body and how TETFund has been a strategic partner with the institute and others who share mutual aspiration with the Fund in sustaining the culture of excellence at every level.

While speaking on the law establishing TETFund which limits beneficiaries of the Funds interventions to universities, polytechnics and colleges of education, Arc. Echono acknowledged that the Fund has seen so many opportunities for partnerships and collaborations which had become manifest especially in the area of Research and Development.

He added that since Research is one of the core mandates of the NIALS and given the pre-eminence shown by the institute, it is a window the Fund might explore as part of efforts to enthrone a culture of research and advancing frontiers of knowledge.

The executive secretary expressed delight at the institute’s affiliation with the Obafemi Awolowo University, Ile-Ife, urging the management to lean on the collaboration with the university which is the only window of opportunity offered by the Fund for non-beneficiary institutions to benefit from its research grants.

Earlier in his remarks, Director- General of NIALS, Professor Muhammed Tawfiq Ladan thanked the Executive Secretary for receiving his team and commended the Fund on the delivery of its mandate.

He gave a detailed insight into the programmes and activities of the institute and also solicited for TETFund support on infrastructural development and possible ways of collaboration in the areas of research.