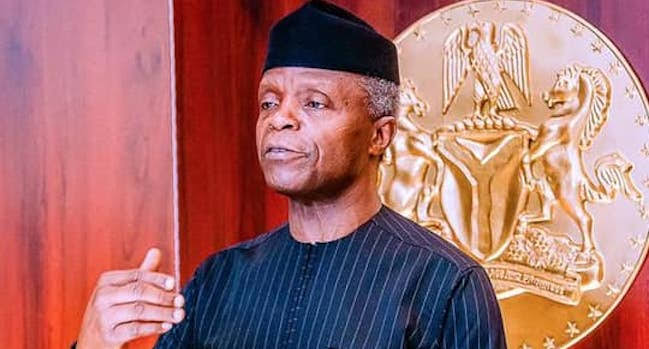 Nigerians displaced from the North-East who are still in Cameroon will be coming home soon as the Presidential Committee on the Repatriation, Returns and Resettlement of Displaced Persons in the North-East has ordered the immediate resumption of their repatriation.

According to a statement by his media aide , Laolu Akande, prior to the inauguration of the Presidential Committee, the National Commission For Refugees, Migrants, and IDPs (NCFRMI) in collaboration with other agencies had repatriated over 4000 displaced Nigerians from Cameroon before halting the operation.

There are thousands of Nigerian refugees in the neighboring countries of Chad, Niger and Cameroon who are due for repatriation to their homes in Nigeria.

Prof. Osinbajo directed that while the committee reviewed the report of the TWG, the Refugees Commission should without further delay resume the repatriation of displaced Nigerians from the Republic of Cameroon it had previously commenced.

The vice president noted that the repatriation and resettlement of Nigerians displaced in Cameroon and other neighboring countries as a result of the insurgency in the North-East remains a priority, hence the Refugees Commission and other relevant agencies must ensure that the objective was achieved.

Speaking to State House Correspondents later, Governor Babagana Zulum of Borno State, who presented the report of the Technical Working Group at the meeting urged authorities to expedite the repatriation exercise and said “within the last few years, we have repatriated no fewer than 50, 000 people but we still have more than 200,000.’’

He looked forward to the presidential approval to facilitate funding and other logistics required for the re-establishment of the affected communities in Borno State, noting that “the security situation has greatly improved.”

President Muhammadu Buhari, had in February, inaugurated the Presidential Committee on the Repatriation, Returns and Resettlement of Displaced Persons in the North-East, designating the VP as the chair.

The Ekweremadus: Between Benevolence And Primitive Greed