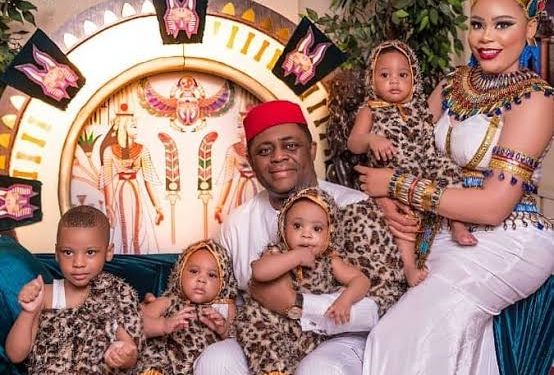 The enstranged wife of a former Minister of Aviation, Femi Fani- Kayode, Precious Chikwendu, has reunited with her four children after months of intense battle.

They have both been embroiled in a bitter custody battle over the kids, who have been in the care of their father since the separation of their parents.

Taking to Instagram, FFK shared a video of the moments the kids’ mother enjoyed with them which he described as a ‘beautiful sight.’

“My sons spent the day with their mother yesterday!
What a beautiful sight it was!
Love, peace and joy all around!
Thanks be to God.
@snowhiteey , Thanks Mama Aragorn,” Fani-Kayode wrote while sharing the video.

It will be recalled that Chikwendu and Fani-Kayode have been locked in a messy legal battle over the custody of their four sons since they parted ways in 2020.

In December 2021, she urged a Customary Court of the Federal Capital Territory (FCT) court to declare that she was never married to the ex-minister.

Contrary to his claims, she said he neither paid her bride price nor performed customary or statutory marriage rites with her. As a result, she sought access to the four children she bore him.

In the same month, the former Minister disobeyed court orders to allow her access to her children, alleging that she has bipolar disorder and schizophrenia.

The former Minister, whom the Nigerian anti-graft agency arraigned for allegedly forging medical reports to evade trial on December 17, 2021, also alleged that she refused to breastfeed her sons, as such, owns no bragging right to be called a mother.

Various court suits have granted Chikwemdu access to her children, who are all below the age of eight.

In the letter titled, ‘Request for Access to the Petitioner’s Four Male Children,’ Ms Chikwendu chose Central Park in Abuja to meet with the children on December 18, 2021, from 9 a.m. till 6 p.m.

Other days scheduled for the visitation were January 1, 2022, New Year’s Day, at the same venue and time.

The petition ‘Justice for Snowhite and Sons’ billed to hit 10,000 signatures had accumulated 8128 signatures as of press time.

According to Chikwendu, the petition was initiated “to reach all international agencies reachable.”

In the petition hosted on Change, org, the ex-beauty queen said her ex-partner has a history of abusing women.

According to her, she experienced severe mental and physical abuse for six years together.

Chikwendu also claimed she was locked up in a mental home where she was injected with substances on the ex-ministers orders to “enable him to create a situation to take over her kids.”

The mother-of-four said since their affair ended on August 2, 2020, she has been denied access to her children.

The petition partly read: “This petition would help African women who have been denied a right to their children because they were married to or cohabited with a person of power.

“This petition would put an end to bullying and oppression from political spouses who have the power and means to oppress and frustrate their partners out of the lives of their growing children who need the love and care of both parents. Precious is seeking justice and custody of her children. This bill will help her bring her problem before the International community.”