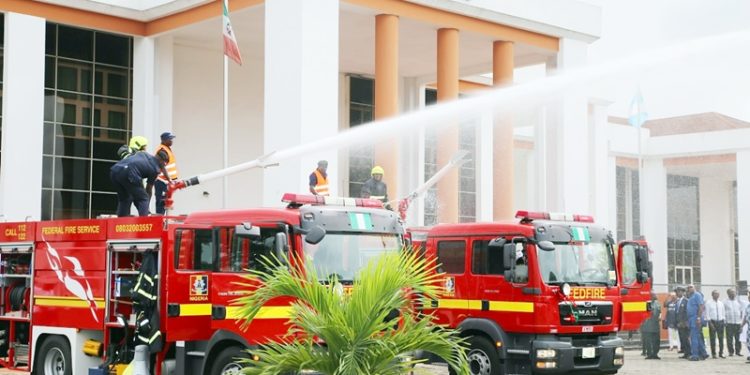 Apparently worried by the rate of incessant fire outbreaks and the resultant negative effects on the nation’s economy, controller-general of the Federal Fire Service (FFS), Engr. Jaji Abdulganiyu, has announced his agency’s resolve to commence the enforcement and strict adherence to the National Fire Safety Code nationwide.

Abdulganiyu who said no stone would be left unturned at curbing the rate fire outbreaks occur, gave a one -month ultimatum to defaulters of its building fire risk assessment to comply or face sanctions.

He spoke at a special event to commemorate his 100 days in office yesterday in Abuja.

Engr. Abdulganiyu who stressed the need for public buildings to subscribe to the liability insurance policy for public and private buildings noted that the National Fire Safety Code prescribes sanctions running up to one-year imprisonment, N 500,000 or even both, depending on the magnitude of the infractions.

While admonishing public building owners to ensure total adherence to the fire safety requirements in their various facilities, he said becoming familiar with the code would let operators and staff know how to react to fire emergencies and when to call the fire service if necessary.
He also called on gas station operators across the country to familiarise themselves with the fire safety code to prevent fires in the workplace.
He warned the general public to desist from attacking firefighters responding to fire calls and appliances or face the full wrath of the law, stressing that the service can no longer afford to risk the lives of its men and expose its very expensive trucks to destruction.
The controller general who wondered why efforts by dedicated firefighters to always get to scenes of fire disasters are frustrated by mobs, who attack them and their trucks with clubs and dangerous weapons, called on community and traditional leaders to take the responsibility of educating and cautioning their followers on the dastardly act.

He reeled out other achievements attained within his 100 Days in office to include; FFS collaboration with NAFFCO in UAE and the Turkish Army in the area of chemical, biological, radiological and nuclear firefighting, which necessitated his visit to Konya State.

Others are the actualisation of its partnership with the Nigerian Air force on the establishment of Aerial Fire Response unit, pursuing vigorously, the enactment of the Fire Service Act and other extant laws.